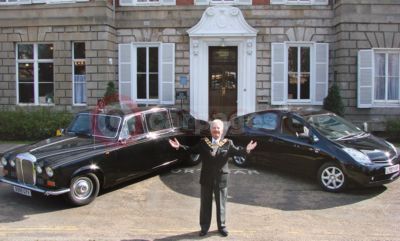 The Mayor of Richmond upon Thames, the London borough in the headlines recently for linking residents’ parking charges with CO2 emissions, has broken with tradition by switching from a limo to a Toyota Prius as his official car.

“Climate change is the biggest issue facing the planet today and the only way we can combat it is through changing our behaviour,” said the Mayor, Cllr Bill Treble. “As the first citizen of the borough, it is appropriate that I should lead by example, and I’m more than happy to have this superb new Prius.

“It represents the cutting edge of fuel-efficient technology and will massively reduce carbon emissions generated by Mayor’s engagements – on average more than 300 trips every year.”

Cllr Treble, a retired computer programmer, represents the borough at civic functions and works to raise money for local good causes. One of London's most affluent areas, Richmond also emits more CO2 than most.

As part of its drive to become Britain’s greenest borough, its Liberal Democrat council now charges residents with the most polluting vehicles up to £300 to park in controlled zones. Those with more than one car pay a 50 per cent additional levy.

Meanwhile, the owners of low-emission cars such as the Toyota Prius are enjoying a 50 per cent reduction in parking charges. The council hopes other local authorities will follow suit.

In contrast the 1.5-litre petrol-electric Toyota Prius, which was bought outright, delivers up to 65mpg on the combined circuit. It is particularly efficient around town, when its electric motor comes into play, and emits only 104g/km of CO2.

“Our first consideration when looking for a new car was to find one which was the most fuel-efficient and least polluting,” says Cllr Treble. “I hope that residents will follow the council’s lead and make emissions a key consideration when buying a new car.”