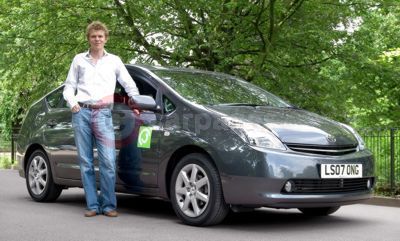 Toyota’s hybrid technology combined with a carbon-offsetting programme is set to make Climatecars, London’s new eco-friendly taxi service, one of the greenest around. As its name indicates, Climatecars is taking a no-compromise stance on the environment. The company’s operations are totally Carbon Neutral from the outset.

Five Toyota Prius petrol-electric cars were delivered to Climatecars at the start of June, with three more due in July and further cars to be added in line with demand. The vehicles, a combination of T3 and T4 grade models, are finished in metallic grey and fitted with black leather seats. “We’re aiming to serve the corporate market in central London who care about their carbon footprints, and by operating a superior service we're looking to grow quickly,” says Climatecars’ founder Nicko Williamson. The service was set to start in mid-June, following driver training on the new cars.

For Nicko Williamson, a Bristol University history graduate, Climatecars is his first business and the culmination of two-and-a half-years of planning. “After looking at LPG, biofuels and other eco-friendly technologies, it was clear that hybrids were the natural way to go. “The Prius is one of the greenest cars on the road, it has plenty of space and it's a very practical option for this industry,” he says. “It’s an extremely clever vehicle with a lot of potential.”

Climatecars’ vehicles are supplied through London Toyota business centres Jemca Edgware Road and Currie Motors Twickenham. The cars are expected to average around 30,000 miles a year, and while Prius CO2 emissions are notably low at 104g/km, every mile covered will be logged and offset through the Carbon Neutral Company. Renewable energy is also used in the Climatecars office.

‘Punctual cars, driven by courteous drivers who know where they’re going’ is Climatecars’ slogan, and Nicko Williamson is confident that another selling point will be the Toyota Prius itself.

“Many people are still unfamiliar with hybrid technology, and we think that our passengers will find it interesting to travel in the Prius, with its silent running at low speeds and its energy monitor. I would think we'll be helping to spread awareness of the car and hybrid technology significantly.”