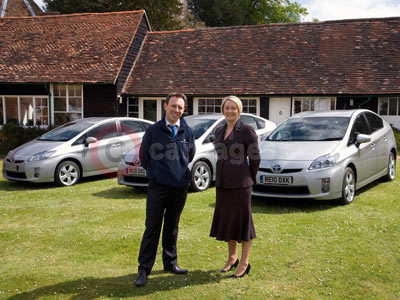 No, Toyota's popular hybrid hatchback hasn't gone amphibious - Land & Water Services Ltd is part of a group that specialises in civil engineering projects on, in or near the UK's inland and estuarial waters.

The company's latest order for three Toyota Prius T3 hatchbacks for project managers is part of a restructuring of the fleet that puts environmental awareness to the fore.

Land & Water Services, is based at Guildford, Surrey and, because of the nature of its work, operates a stringent environmental management system compliant with ISO 14001:2004.

The Toyota Prius, with its low (89g/km) carbon dioxide emissions and 72mpg official combined fuel economy figure, is reckoned to project the right image for a company that works in close co-operation with the Environment Agency.

"Prius was also selected for the cost benefits it offers to the company and our employees, including the tax advantages," says Group Procurement Manager Simon Greenaway. The Toyota Prius range falls within band A for VED, with no annual road tax charge.

Land & Water Services, which has around 100 employees, operates a mixed-badge car fleet and is in the process of reducing the number of 4x4s used by its site managers. It already has a small number of Toyota Prius cars on the fleet - Environmental Scientist Cat Clowes, for example, has covered 200,000 miles in her Toyota Prius and reports that it still drives well: "I love it!" she says.

Simon Greenaway is also enthusiastic: "I've driven the Prius and I like it."

The five-door hatchbacks are expected to average around 30,000 miles a year with Land & Water Services. Delivered by Toyota Centre Fish Brothers of Swindon, they are supplied on a four-year contract-hire agreement with Arval.