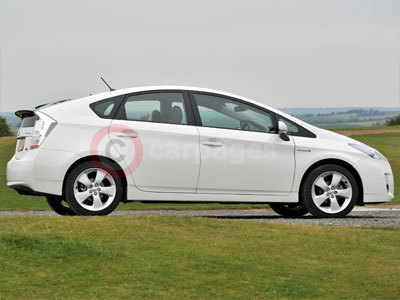 Toyota has helped make maritime history by shipping its cars across the world on board a ship part-powered by solar energy. The Auriga Leader docked in Long Beach, California earlier this month with the new Toyota Prius and other Toyota and Lexus models on board, destined for the North American market. On its voyage from Japan, the ship was able to harness the power of the sun to reduce demand on its diesel engines.

It is yet another example of how the new Toyota Prius benefits from clever use of renewable energy sources throughout its life cycle. Solar power provides a large proportion of the electricity used to power the Tsutsumi factory where it is built, and, in a first for a volume production car, the Toyota Prius can be equipped with its own solar panels to run a fan to keep the cabin cool while the car is parked.

The Auriga Leader is the first vessel of its kind to use solar power in this way, capturing energy through 328 photovoltaic panels mounted on its top deck. The system produces up to 40 kilowatts of electricity, reducing demand on the engines and thus cutting both fuel use and emissions. The technology has been developed as a demonstration project by Toyota Motor Corporation and NYK Line, the vessel's owner and operator. Other ships have used similar concepts, but only to provide power for the crew quarters.

Launched in Kobe, Japan, December 2008, the 60,000-tonne ship is 200m long and can carry 6,200 vehicles. Its performance contributes towards NYK's aim of reducing its car carrier fleet energy consumption by 50 per cent by 2010, together with a range of other design, technical and operational improvements.