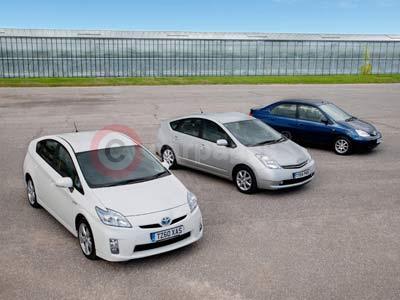 At first glance, there was little about the first generation Toyota Prius that suggested it could be the start of a global phenomenon, a quirkily designed saloon that proved to be the pathfinder for game-changing engine technology.

Ten years on from its arrival in the UK and Toyota Prius - now in its third generation - is unchallenged as the world's - and Britain's - most popular hybrid, with more than two million global sales to its credit.

While Toyota has continued to develop and improve the performance of its hybrid technology, rival manufacturers are only now bringing their own systems to the marketplace. And within two years, the next chapter of Toyota Prius history will open with the first phase in the introduction of the Toyota Prius PHV (Plug-in Hybrid Vehicle), a model that is currently undergoing a trial leasing programme around the world prior to its market launch.

The Toyota Prius was the first full hybrid car for the mass market, breaking new ground with its innovative Toyota Hybrid System (THS) powertrain, a combination of a petrol engine and an electric motor that worked together or independently of each other to achieve consistently class-leading low emissions and excellent fuel efficiency. It augured well for the original model that it arrived in the UK in the wake of a national fuel shortage caused by a tanker drivers' strike, an event that focused the public's mind on the value of vehicles with low fuel consumption.

Toyota's pioneering technology quickly won plaudits, not least a succession of International Engine of the Year Awards that have made THS and its successor, Hybrid Synergy Drive, the most honoured engines in the history of the annual competition.

Hybrid was a novelty for the market in October 2000, but today it enjoys wide acceptance and appreciation from motorists who have grasped both the technical concept, and the benefits it can deliver in environmental performance and running costs.

The introduction of the second generation Toyota Prius in 2004 signalled a step change in Toyota's hybrid power strategy. Here was a car that was larger, better packaged, with a more contemporary - yet highly aerodynamic - design, and powered by a more powerful and sophisticated Hybrid Synergy Drive system. At the same time, both emissions and fuel economy were significantly improved. The Toyota Prius was named the 2005 European Car of the Year and UK annual sales more than doubled within a year.

Business users have been among the most enthusiastic supporters of the Toyota Prius, appreciating the significant tax and fuel savings the can be realised by introducing hybrids to company fleets. Exemption from the London congestion charge further strengthened the car's appeal to the capital's motorists, while its ability to run solely on its electric motor with zero tailpipe emissions has made it a top choice as urban transport not least for car clubs and cab and private hire operators.

In 2009 the current, third generation Toyota Prius was introduced, benefiting from even greater advances in technology, design and innovation. The introduction of a 1.8-litre petrol engine in place of the original 1.5-litre unit helped increase power output by 24 per cent, while at the same time Toyota's mastery of hybrid powertrain engineering achieved a 14 per cent improvement in fuel economy and a 10 per cent decrease in CO2 emissions to a market-leading 89g/km.

Backed by the established reliability record of its predecessors - the Toyota Prius has fewer warranty claims than any other Toyota model - the new car raised the performance bar. At the same time, Toyota has broadened its hybrid range, introducing its British-built Toyota Auris Hybrid earlier this year as the first full hybrid model in the family hatchback segment.

Thanks to its success and proven qualities of Hybrid Synergy Drive, Toyota looks with confidence to future development of the model, notably with the planned introduction of the Toyota Prius PHV (Plug-in Hybrid Vehicle). It also aims to introduce hybrid versions of all its European model range by the early 2020s, and to be selling one million hybrid vehicles a year within the next few years.