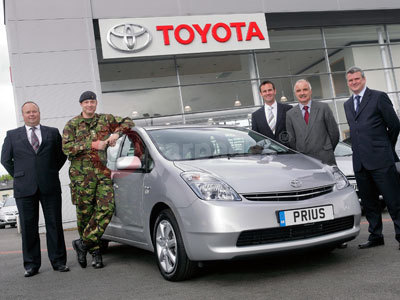 The Toyota Prius Recruited Into The British Army

The British Army has taken delivery of a fleet of 50 Toyota Prius as part of its ongoing mission to reduce emissions of gases known to damage the environment.

White Fleet, the branch of Headquarters Land Forces which manages the Army's 6,600 non-deployable administrative vehicles, is meeting a government target to ensure all cars procured between 2007 and 2011 produce less than 130 g/km of CO2.

Brokered by the Army through its leasing partners VT Group and Lex Vehicle Leasing, the Toyota Prius which produces just 104 g/km of CO2 replaces 50 Vauxhall Vectras, whose credentials are 154 g/km. The replacement contract comes at nil extra cost to the Army and is the Ministry of Defence's biggest commitment to date to the use of hybrid vehicles. White Fleet is determined to drive down CO2 emissions with further deals before 2011 to arrive at a figure well below the 130g per kilometre target.

Brigadier Mark Armstrong, who as Director Infrastructure leads the Army's sustainable development projects, said: "Our vehicles are constantly being changed over because they have reached a certain mileage or a certain life. When we change our vehicles we are looking for value for money but also having in mind those targets the Government has set us on sustainable operations. Taking delivery of this fleet of hybrid vehicles, whose carbon emissions are below the 2011 targets set to us at HQ Land Forces by the Government, means we are ahead of schedule in terms of what the White Fleet produces."

VT White Fleet director Nick Earl said: "We have worked closely with the MOD to help them meet their carbon reduction targets. We were able to assess their specific challenges and present them with data to make the right vehicle replacement choices to tackle the issue."

The 50 Toyota Prius, were recently handed over to the Army with the help of Andy Houston, Business Centre Manager at RRG Toyota in Bolton, as supplying dealer. Andy went through the Toyota Prius controls with Colonel Nick Millen, Catterick Garrison Commander who drove away in his Prius that day. Also present from Toyota (GB) PLC were David Bell, Manager National Leasing, Rental & Special Sales along with Robert Bryant, Manager, Public Sector.