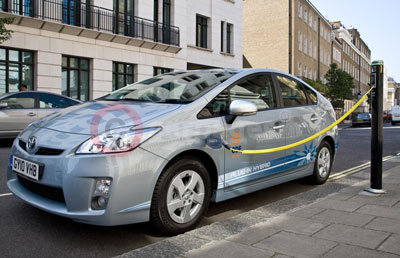 Toyota's progress towards bringing the Toyota Prius Plug-in Hybrid to the marketplace has received a significant boost with the news that it qualifies for Government grant support against its future purchase price.

The Department for Transport and the Office for Low Emission Vehicles announced that the Toyota Prius Plug-in - currently undergoing a demonstration leasing programme in London - meets its criteria for the Plug-in Car Grant, by which people buying the car will receive up to £5,000 towards its cost.

"This consumer incentive scheme will further strengthen the case for Prius Plug-in among private and fleet owners, following the model's market introduction in 2012."

Toyota Prius Plug-in is equipped with a compact and powerful lithium-ion battery that enables the car to run on electric power alone for up to 12.5 miles and at speeds up to 62mph with zero fuel consumption and zero tailpipe emissions.

A key benefit of the hybrid system is that, once battery power has been used up, the car switches automatically to its petrol-hybrid engine, removing the 'range anxiety' associated with all-electric vehicles.

Thanks to its ability to run further in EV mode, it achieves exceptional combined cycle fuel efficiency, with an official 108.6mpg and CO2 emissions of 59g/km, figures that are a 30 per cent improvement on the standard, third-generation Toyota Prius.

Toyota Prius Plug-in's environmental performance is further strengthened by the fact that, compared to diesel cars, it emits much less NOx and no particulates. And when running on its electric motor alone - in EV mode - it produces no CO2 or NOx.