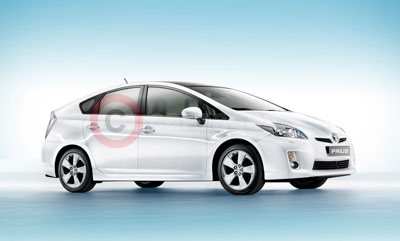 A new chapter in the history of the Toyota Prius opens at the Detroit motor show with the official unveiling of the all-new, third-generation of Toyota's world-leading hybrid power car.

With a heritage of more than one million sales worldwide since the original model was launched in 1997, the new Toyota Prius takes the benefits of hybrid to a new level, promising even better fuel economy and performance and reduced full lifecycle emissions, from manufacturing through to ultimate disposal. These qualities are combined with sharper styling, improved interior space and comfort and a more rewarding driving experience.

The new Toyota Prius remains a full hybrid, a car that can run on its petrol engine or electric motor alone, or on a combination of both, according to driving conditions. It adopts a larger, 1.8-litre VVT-i petrol engine, while a comprehensive re-engineering of the Hybrid Synergy Drive system brings significant reductions in weight and size, contributing to the overall improvements in fuel economy and emissions.

Further weight saving gains are achieved through more extensive use of lightweight aluminium and ultra high-tensile steel in the Toyota Prius's construction.

The Toyota Prius is built on an all-new platform for better handling, stability and safety and it benefits from new styling that is sharper and sportier, while achieving even better aerodynamic performance. With the benefit of more wind tunnel testing than any other Toyota before, it achieves a coefficient of drag (Cd) figure of 0.25, the lowest of any mass produced car in the world. With particular attention paid to the flow of air beneath the car, this supports quieter running, improved stability and greater fuel efficiency.

The Toyota Prius retains its distinctive wedge shape and is only marginally longer than the current model, but changes to the roof profile improve rear seat headroom and revisions to packaging of the Hybrid Synergy Drive system allow for more space in the boot.

The interior has also undergone a comprehensive redesign, with improved ergonomics and styling that reflects the Toyota Prius's user-friendly application of advanced technologies.

The Toyota Prius performance and specification details specific to the European market will be announced at the Geneva motor show in March 2009. The model is due to go on sale in the UK in the summer of 2009.