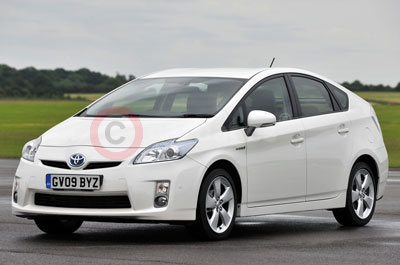 Total system power output has been increased by 24 per cent, from 112 to 134bhp (113 to 136 DIN hp). Performance matches a conventional 2.0-litre family car, with seamless acceleration from nought to 62mph in 10.4 seconds, half a second quicker than the current Toyota Prius. Top speed is 112mph.

At the same time, overall fuel economy has been improved by 10 per cent. Adopting a larger, 1.8-litre engine in place of the 1.5-litre unit reduces rpm in high speed driving to improve long-haul cruising fuel efficiency by about 10 per cent. In standard driving mode the new Toyota Prius returns 72.4mpg in the European homologation combined cycle.

The full hybrid Toyota Prius is the only family car to combine the fuel consumption levels of a small city car with a cruising range of almost 715 miles, which is 93 miles more than the current model, in spite of having the same size fuel tank.

The new Toyota Prius meets Euro 5 emissions standards and is expected to meet the Euro 6 requirements, too. Its CO2 emissions are a best-on-the-market 89g/km, a figure unmatched by any other family car, earning Prius significant tax incentives in the UK and other European countries.

Moreover, when switched to EV (electric vehicle) running, the Toyota Prius gives zero emissions performance for up to two kilometres at speeds up to 31mph.

The new Toyota Prius' full hybrid system is capable of operating in petrol and electric modes alone, as well as in a combination of both, and so gives the energy-saving benefits of a series hybrid combined with the performance benefits of a parallel hybrid. It gives the car strong, seamless acceleration and remarkably quiet operation, while still returning class-leading fuel efficiency and exceptionally low emissions.

The system comprises a 1.8-litre petrol engine, a powerful electric motor, a generator, high performance battery, power control unit (PCU) and a power split device that uses a planetary gear set to combine and reallocate power from the engine, electric motor and generator according to operational requirements. The electric motor, generator and power split device have been successfully housed in a single, lightweight, highly compact transmission casing that is roughly the same size as a conventional gearbox. The new driveshafts are smaller and lighter than that in the current Toyota Prius, and reduces energy losses by between 10 and 20 per cent. This clever packaging has been key to Hybrid Synergy Drive's successful installation in the front-engine Toyota Prius platform.

During deceleration and under braking, the electric motor acts as a high-output generator to effect regenerative braking, optimising energy management in the Hybrid Synergy Drive system by recovering kinetic energy (normally wasted as heat) as electrical energy for storage in the high-performance battery.

On-the-road prices for the new Toyota Prius start at £18,370 for the T3 model - the same price as the current model. Likewise, the price of the T Spirit model is unchanged. Thanks to CO2 emissions below 100g/km, the entire range falls within Band A for Vehicle Excise Duty, with no annual road tax charge. Insurance groups are yet to be announced.