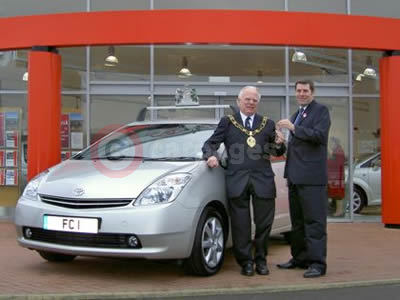 Oxford City Council has strengthened its green credentials with the purchase of a Toyota Prius as its official mayoral car. The authority was set to purchase a BMW 5 Series, but scrapped the plan when it realised the exceptional benefits offered by Prius, the 2005 European Car of the Year.

The Prius was supplied to the council by the Inchcape Oxford Toyota Business Centre in Kidlington. Patrick Atter, Business Centre Manager said: "It’s wonderful news that the council has decided to take a lead by choosing Prius, a car that offers performance, fuel efficiency and exceptional environmental awareness."

Lord Mayor Bryan Keen said he is looking forward to completing his year of office with the Prius and applauded his authority for being one of the first in the country to adopt an environmentally friendly vehicle for such a high-profile role.

Driving in his city’s traffic, Mayor Keen can be confident of causing much less environmental damage than in a gas-guzzling limousine: thanks to Toyota’s Hybrid Synergy Drive, which combines a conventional petrol engine with a small but powerful electric motor, Prius can run on electricity alone at slow speeds, reducing exhaust emissions to zero. In all driving conditions, Prius returns excellent fuel consumption figures, too, ensuring council tax payers’ funds will not be swallowed up at the pumps.

There will be no loss of civic dignity in adopting the Prius, as the car provides excellent interior space and comfort. Advanced features such as the air conditioning system and satellite navigation will help ensure the mayor arrives at functions cool and on time.

Jon Pollock, General Manager Toyota Fleet, said: "Oxford’s landmark decision is yet further evidence of how the Toyota Prius is fundamentally changing the way people think when it comes to choosing the car they drive. They now realise that in order to be environmentally aware, they no longer have to sacrifice performance or convenience, as Prius addresses all these factors without compromise."