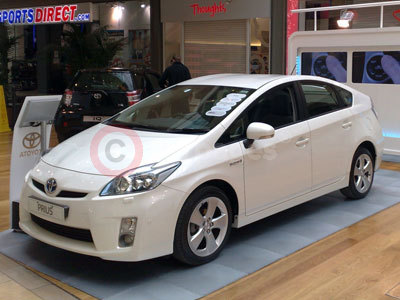 After months of anticipation, the all-new Toyota Prius arrived in the UK this week and is already on the road and on public display.

The latest generation of Toyota's world-conquering hybrid has wasted no time in demonstrating its environmental credentials by taking part in the Revolve Eco-Rally, a showcase for low emissions and fuel-efficient cars that travelled from Brighton to London's City Hall. Supported by the Low Carbon Vehicle Partnership and What Car Magazine's Green Awards, the event was organised by Revolve, an independent group that encourages and promotes sustainable transport.

The new Toyota Prius is also taking centre stage at the Bull Ring in Birmingham as a key feature of the shopping centre's Green Week activities. Under the banner 'Energy', the Toyota Prius is on public view until Sunday 14th June 2009. It is joined on the Toyota stand by the Toyota iQ and Toyota Yaris stablemates, two prime examples of the low emissions/fuel efficient performance being achieved with Toyota Optimal Drive technology.

Next week the Toyota Prius will move on to the Trafford Centre in Manchester, where it will be on show from 15 to 28th June 2009. It will complete its debut tour at Bluewater, in Kent, from 29th June to 12th July 2009.