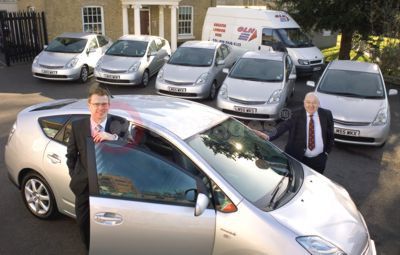 It was comments from passengers that encouraged London’s longest-established private hire and courier service to start using Toyota Prius cars - and by this summer Greater London Hire should have 32 of the petrol-electric hybrids on its fleet.

The latest batch of 12 Prius with green flashes recently joined the 17 cars already on the fleet, a third of which GLH aims to have "greened" in the near future. The passenger car service that GLH started nearly 40 years ago was one of the first in central London. Today, the Finchley-based company operates a fleet of 300 saloon, estate, MPV and executive cars, light vans and motorcycles around the clock, with 20-minute central pick-up and UK-wide parcel delivery among the services it offers.

GLH’s cars and motorbikes are exempt from congestion-charging, so this, for once, was not an incentive for a London fleet to switch to Prius. Instead the move was prompted by a customer survey that indicated a desire for a car that was different, and environmentally sound. With the current-generation Toyota Prius relatively new on the market, GLH took on five cars for a six-week evaluation period - and its staff were as impressed as their customers. "The comments were on the whole very positive," says GLH’s Operations Manager Dan Gurney. As a result the company ordered 12 more of the hybrids, the first Toyotas to join the GLH fleet and also its first alternative-fuelled vehicles. They replaced mainly Rover 75s and VW Passats.

The company now has a separate tariff for its Prius fleet, along with special "E for Eco" call-signs for each driver. "The drivers love the cars," says Mr Gurney. "Using the Prius saves them on average £30 or £40 a week on fuel - they’re self-employed contractors and sign a lease agreement under which we look after the maintenance. They also find driving the cars less stressful.

"The passenger space is superb in the Prius, and most of the comments from passengers refer to how comfortable they find the car. With its slightly raised roof it’s like a mini-Tardis inside, so it’s suitable even for tall people." The cars are leased from Fulton Leasing and are expected to cover 80,000 miles in their two-year tours of duty with GLH. "We replace our cars after that time because we like to keep the fleet fresh," says Dan Gurney.

The original Prius are due to be replaced this October, and they are expected to be in good shape. "We did some hefty cost analysis on repairs, servicing, brakes and tyres after they had done 30,000 miles, with one having done 53,000 miles at that point, and they hadn’t even needed a set of brake pads - incredible," says Mr Gurney. "If you drive the car sensibly, you can simply take your foot off the pedal to slow down, rather than always having to use the brakes as with a conventional petrol or diesel car."

"A lot is said about the environmental and economical advantages of the Toyota Prius, but it’s good to see that the vehicle is also being widely appreciated for its comfort by paying passengers," says Toyota Fleet’s General Manager Jon Pollock. "Greater London Hire’s experience underlines the extent to which the perception of hybrid vehicles has been transformed."