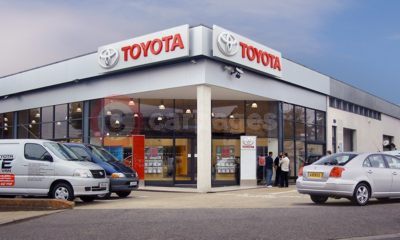 London's Mayor Ken Livingstone may be a non-driver, but he and his partner recently joined the eager line of customers for Toyota's environmentally friendly Prius petrol-electric hybrid car. The couple bought the Prius from the capital's Jemca Toyota - but it was the concerns of fellow-customers about the Mayor's congestion-charging policy that helped boost the centre's September sales to the highest ever recorded in any one month by a Toyota dealership.

Jemca sold 358 new vehicles during the period, and of these more than 30 per cent were Toyota Prius hybrids. Including used and fleet partnership cars, an incredible total of 468 vehicles were driven out of Jemca's Edgware Road showroom in September. The result smashed the previous monthly sales record of 345 units set four years ago, again by Jemca, Europe's biggest Toyota dealership. "We sold 111 Prius cars in September, and the majority were top-of-the-range T-Spirits," said Jemca Sales Executive Roger Hart, who specialises in Prius sales. "There's no doubt that much of this was driven by concerns over the extension of congestion-charging west into Kensington and Chelsea next February."

Drivers of the low-emission Toyota Prius are exempt from the £8 daily congestion charge. "People driving into the capital during the day can save up to £2000 a year by driving a Prius - and even those residents who get a 90 per cent discount can save several hundred pounds on council charges," said Roger Hart.  But congestion-charging is only part of the story.  "Drivers' children are increasingly encouraging their parents to go green, and the age range of those who want to drive Prius has come down over the past year as hybrids become more fashionable."

Actors Jude Law and Koo Stark, TV personality Esther Rantzen and promoter Harvey Goldsmith are among the well-known names to have bought Prius cars from Mr Hart at Jemca.  "Another factor is that a lot of people in London have been passengers in Prius taxis run by fast-growing companies such as Green Tomato - another Jemca customer - and the experience has encouraged them to look into buying."

Further interest in Prius was generated by Roger Hart's BBC and GMTV appearances demonstrating the Prius T-Spirit's Intelligent Parking Assist (IPA), which uses cameras and sensors to assess a space and steer into it automatically. The driver has only to activate the device and control the speed and braking.

Also selling particularly well for Jemca in September, reflecting a general pattern for Toyota in retail sales, were its smaller low-emission, fuel-saving cars, including the popular Yaris supermini (77 units), Corolla (37) and Aygo (25), while thirty-three 4x4 enthusiasts became RAV4 owners. It was not only the number of cars sold that delighted Jemca, but the fact that with so many customers opting for financing it managed to sell more than £1 million-worth of Toyota finance products in the process - another figure for the record books.

Jemca's September figures would seem to make it the envy of any motor dealership in what are far from easy times for retail sales. "Although Prius has become our best-selling model over the course of 2006, these results are really about the fact that Toyota has such a good product range across the board," said Roger Hart.