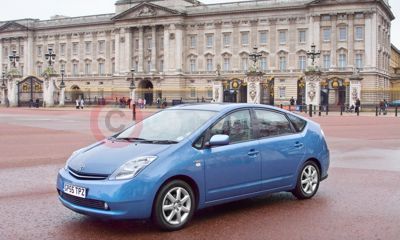 Toyota has announced that worldwide cumulative sales of the Toyota Prius, the world’s first mass-produced hybrid vehicle, have passed the half-million mark, with 504,700 units having been sold by the end of April this year.

Toyota launched the Prius in 1997 in Japan and started selling it overseas, including the UK, in 2000. The second-generation Prius, equipped with the Toyota Hybrid System II, was introduced in 2003 with an emphasis on delivering both eco-friendliness and driving performance. It has been enjoying good sales both in Japan and overseas, especially in North America.

The Prius is now being made outside Japan for the first time, with production for the Chinese market starting in Changchun, China in December 2005.

Overall cumulative worldwide sales of Toyota (including Lexus) hybrid vehicles passed the 600,000 mark at the end of March this year. Toyota regards hybrid systems as representing a key technology for the 21st century and has been endeavouring to promote their greater use. Capitalising on the high applicability of hybrid systems, Toyota aims to widen its hybrid vehicle lineup.