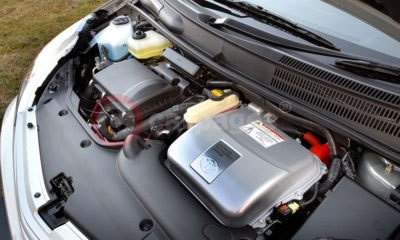 The Toyota Hybrid Synergy Drive system of Toyota Prius has been awarded two category wins in the International Engine of the Year Awards 2005.

The revolutionary Hybrid Synergy Drive system won in the 1.4 to 1.8-litre category and also took first place in the ‘Best Fuel Economy’ category - thanks to its application in the Toyota Prius with outstanding fuel consumption of 65.7mpg (EC mode, combined).

The awards were collected by Mr Jon Williams, Toyota’s European Marketing Director and Mr Colin Hensley, General Manager of the R&D External Affairs and Communication Division, during a special awards ceremony that took place in Stuttgart on 1 June 2005.

These latest accolades for the hybrid powertrain mean Toyota has set a new record in the International Engine of the Year awards with no fewer than nine titles for Prius over its two generations:

The International Engine of the Year awards have been held since 1999 and reward the best engines available on the market. Every engine in mass-production installed in a production car on sale in more than one country is eligible.

The jury is composed of a panel of 56 renowned journalists from 26 countries around the globe, covering five different continents.

In total, 12 categories have been created to specifically distinguish engines by size, fuel economy and performance.