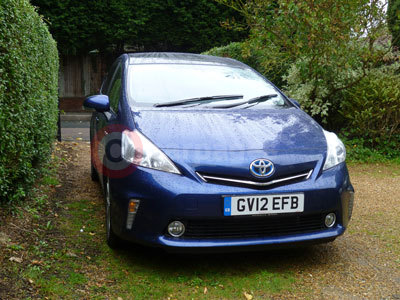 What a success the Prius hybrid has been for Toyota. Over the 15 years since the car’s launch back in 1997 more than 2.6 million have been sold around the world, and it is the undisputed darling of the seen-to-be-green set in eco-obsessed California. The Prius was the pioneer hybrid car, and now here comes its big brother. This is the world’s first hybrid MPV, a seven-seater version of the Prius, imaginatively called the Prius+.

Currently it has no direct rivals, as there simply aren’t any other hybrid seven-seater models available in the car market. So the Prius+ can count on being in demand to ferry large families keen on a green agenda. Toyota is relatively modest about its prospects, expecting to sell around 2,000 of the Prius+ per year in Britain, and it should have no difficulty in achieving that level of demand.

Elsewhere in the world, including its native Japan and in the United States, the Prius+ will be offered with either five or seven seats, but here in Britain it is being sold exclusively as a seven-seater. It is available in a choice of two versions, the T4 and T Spirit. Prices start from £26,195 for a T4, and the better-equipped T Spirit is £29,495.

Equipped with a 1.8 litre petrol engine and an electric motor and lithium-ion battery pack, automatic stop-start and electric continuously variable transmission, the Prius+ has a combined power output of 134 bhp, with 105 lb ft of torque from the engine and another 153 lb ft from the electric motor. This is adequate to pull a car weighing just under one and a half tonnes, at 1,495 kilos. Average economy is 68.9 mpg and CO2 output is 96 g/km, putting the car in VED band A for a free annual tax disc.

This car is more steamed fish than sizzling steak, which is to say that the performance is solid and adequate but it won’t quicken your pulse in any way. Flat out it is capable of just over three figures, and the 0-62 acceleration time of 11.3 seconds is respectable but quite ordinary. In any case, if most or all of the seats are occupied the extra weight will dull the performance somewhat. That is when a good diesel-engined seven-seater, with its superior mid-range torque, starts to look like an appealing alternative.

Toyota Prius+ Images may not be UK specification cars. Colours and exterior and/or interior elements may differ from actual models.