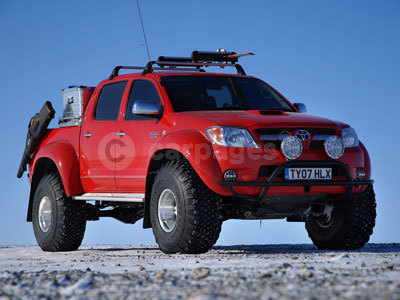 The Toyota Polar Hilux, the mighty machine driven by Top Gear presenters Jeremy Clarkson and James May to the magnetic North Pole, is to go on display at the 2010 Outdoors Show. The 4x4 that conquered the ice and snowfields is appearing on the stand OU925 at the show at the NEC, Birmingham from 26th to 28th March 2010.

Millions of television viewers around the world witnessed the mighty Toyota Hilux becoming the first car to be driven to the Magnetic North Pole. Now intrepid drivers have the chance to get behind the wheel of a similarly awesome Hilux and test their skills across the frozen wastes in a new range of adventure off-roading tours which are being promoted at the show. Reykjavik-based Arctic Trucks, the specialist company which engineered the Toyota Hilux to cope with the extreme conditions of the Top Gear challenge has teamed up with Extreme World Races, who arrange the North and South Pole races, at the 2010 Outdoors Show combining their considerable skills in coping with Arctic conditions and racing events.

The Arctic Trucks fleet of vehicles includes two Toyota Hilux Invincible Double Cabs equipped with special features to meet the demands of tackling the country's tundra, glaciers, lava fields and mountains, including a set of giant 38-inch tyres that allow the vehicle to traverse deep snow and thin ice. Trips can be between two and five days and longer expeditions through the wild landscape of Iceland can be arranged.