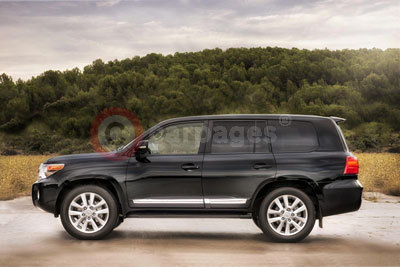 The V8 Toyota Land Cruiser is powered by a 4,461cc turbo diesel engine which produces 286 bhp and can deliver 650Nm of torque between 1,600 and 2,800rpm. The diesel V8 engine meets Euro 5 emissions standards

The Land Cruiser’s exterior has been tweaked for 2012 to add LED lighting technology with the incorporation of LED daytime running lights, LED tail lights and LED indicators in the door mirrors. The mirrors also incorporate the side view cameras, which compliment the forward and reverse cameras to give the driver near 360 degree low down vision, which is benenfical off road, reversing and linking up to trailers.

Interior wise emphasis has been placed on quality with better ergonomics – the front seats gain cool air and seat heaters whilst the dashboard has been given a complete makeover. The driver's instrument binnacle has white Optitron dials that are backlit with blue illumination and a large, colour TFT multi-information display.

Off Road technology now includes Crawl Control with Turn Assist, a system which has been developed so that it can help drivers execute very tight turns without having to reverse mid-bend. Operating at speeds below 6mph (10km/h), it reacts to the driver's steering inputs, braking the rear wheel on the same side of the vehicle as the direction of turn. The wheel braking force automatically increases with the steering angle, reducing the vehicle's turning radius.

Plus there Multi-terrain Select (MTS) which automatically modifies the throttle, braking and traction control to suit off-road conditions and deliver the best possible traction and vehicle control.

MTS offers a choice of five terrain modes: Mud and Sand; Loose Rock; Mogul; Rock; and Dirt and Rock. The new Multi-terrain Monitor automatically displays a view of the vehicle's immediate surroundings on the multi-information screen.

If you need to know where you are going the Toyota Land Cruiser V8 will use Toyota’s Touch Pro system which covers the multimedia functions and pan-European satellite navigation systems. The system incorporates a double tuner DAB/DAB+/DMB digital radio, making it compatible with the advanced TPEG (Transport Protocol Expert Group) traffic information system, which has a much greater information capacity than the TMC-RDS analogue system. Toyota Touch Pro can also read DVD audio and video files.

UK specifications are still to be announced, but the list of items newly available for the model include a heated steering wheel, front seats with cooling and heating functions, a cooled box in the centre console, a powered upper tailgate section, bi-xenon headlamps and a 200V power outlet in the luggage compartment.