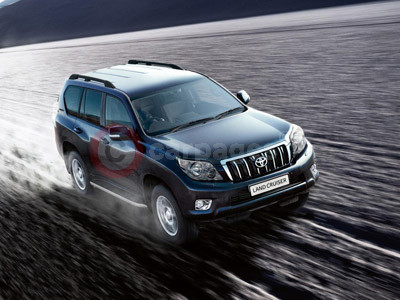 The Toyota Land Cruiser clocks up 60 years this year, stronger and better than ever. Far from aging gracefully, the legendary 4x4 remains one of the toughest machines on four wheels: it's conquered the Arctic (and Antarctic) wastes, traversed deserts, ploughed its way through tropical rain forests and generally taken the worst the world can throw at it in its stride.

As the Toyota Land Cruiser reaches this landmark, Toyota is launching new top-of-the-range 60th Anniversary versions of both its standard five-door Toyota Land Cruiser and the flagship Toyota Land Cruiser V8. They have the same robust construction and sophisticated array of driving and control systems for exceptional on and off-road performance as their established sister models, together with some extra style and equipment details.

There's more power and torque on tap, as well, as the 3.0-litre D-4D engine fitted to Toyota Land Cruiser has been re-engineered. As a result maximum output is up from 171 to 188bhp and maximum torque from 410 to 420Nm - performance gains achieved without harming fuel economy or emissions levels. With the benefit of a new diesel particulate filter (DPF), the engine meets the latest, Euro 5 emissions standards.

Toyota Land Cruiser's ancestry can be traced back to the Toyota BJ of 1951, a truck-derived model that was initially developed for military use. Within six months of its launch the BJ was hailed as a champion, becoming the first vehicle to be driven to the sixth hill station of Japan's Mount Fuji, 2,500 metres up. As a result of this feat, the BJ was added to the Japanese police fleet and the model's long-term success began. In 1954 the new Type 25 BJ was given a generic model name - Land Cruiser - which has been used ever since.