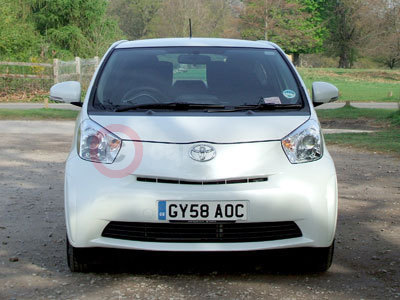 Could this be Toyota's answer to the smart? Perhaps, but it has been a long time coming and potential customers should not be fooled into thinking that the Toyota iQ is the same, only different.

Looks can be deceiving and although the Toyota iQ appears to be about the same size as a smart fortwo, it is actually quite a bit larger. Large enough, in fact, to allow for two rear seats, which is something the smart doesn't have. Toyota would have us believe that there is room for four footballing adults, according to the television advertisements. Furthermore, the blurb says that there is room for three people of 6ft 3in in height, plus one child. For sure, this can be achieved, at a push, but they will all be cramped.

I am 5'6" tall and with my seat in place, there is minimal legroom behind. Of course, this is on the driver's side and the steering wheel and column take up a fair bit of room. On the front passenger's side, Toyota designers have replaced the conventional glovebox with a detachable pocket, so there is a bit more space on that side. However, my partner is a six-footer and when he is sat comfortably, there is absolutely no legroom behind his seat. What's more, any adult sat in the rear seats has to contend with the roof lining for head-space.

It begs the question, why would Toyota add seats at the expense of comfort and luggage space? With the rear seats upright, there is just 32-litres of luggage space in the Toyota iQ - I have seen more capacious handbags - which renders it all but useless. The seats do fold but the headrests need to be removed first, which also caused me a problem as they wouldn't come off for some reason. That done, the seats will fold flat to increase the available space to a maximum of 238-litres and a much more practical option. I found it easier to transport bags in the front passenger footwell.