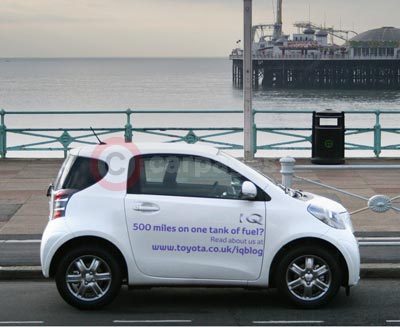 There is no questioning the Toyota iQ's status as one of the most fuel-efficient cars on the market, but a new hypermiling challenge has seen the tiny Toyota perform way beyond its official mpg figures.

Piloted by two of the team from the Toyota iQ blog, a standard iQ with a 1.0-litre VVT-i petrol engine, broke through 500 miles on a single tank of fuel. What makes the achievement all the more remarkable is that this was no finely tuned marathon attempt, but a gruelling drive through some of the most congested town centres in the south and midlands of England and Wales.

Setting out from Brighton on 25th January 2009, the team tagged 18 cities in two days on a route that took them as far west as Cardiff and as far north as Wolverhampton. With atrocious weather conditions and rush hour traffic to contend with, there was pessimism about reaching the target, given that the theoretical range from a full 32-litre tank in a Toyota iQ is 462 miles. But in spite of wind, rain, congestion and the need to run the heater, headlights and wipers - all a drain on fuel consumption - the car managed 504.2 miles before ending its journey in central Oxford. That works out at 71.6mpg, compared to an official combined cycle figure of 65.7mpg.