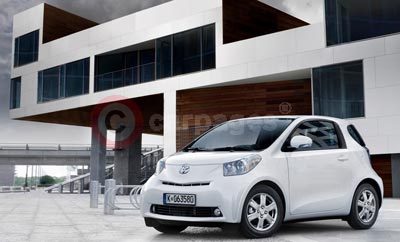 The revolutionary Toyota iQ, the World's smallest four-seater passenger car, has won the 2008 Japan Car of the Year award by a landslide over rivals such as the Citroen C5, Audi A4 and Jaguar XF. The innovative Toyota iQ scored more than double the points of the second placed, receiving top marks from 39 of the 65 jurors who voted.

The judges praised the Toyota iQ for its space efficiency and design, particularly the iQ’s capacity for seating four people within a body less than three metres long, as well as its combination of high levels of safety and low CO2 emissions.

But this incredible result will not be repeated in the 2008 European Car of the Year.

The reason is that sales in Europe do not start until January 2009, past the cut-off for the European Car of the Year for this year.

Both Japanese and European COTY competitions are run in similar ways with a wide selection of new cars appraised and voted on by motoring journalists. In Japan COTY each of the 65 jurors has 25 points, of which 10 have to be given to one car, and the remaining 15 points allocated to four other cars.