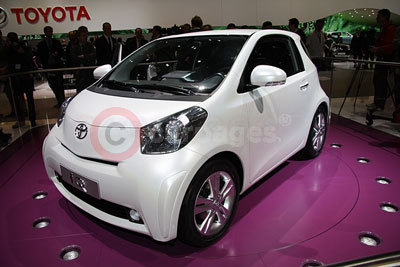 Toyota has wasted no time in turning its tiny, eco-friendly iQ concept car into a production reality.

A finished prototype was unveiled at Geneva, just six months after the original iQ was shown at the 2007 Frankfurt show. And it'll be on sale before the end of the year, said Toyota Motor Europe senior vice-president Andrea Formica.

As short as a Smart, but wider, Formica said iQ was “the world's smallest four-seater passenger car. Its clever seating configuration takes three adults plus a child, in less than 3 metres.”

It will offer customers “a new mode of urban transport”, Formica said. It will meet Euro NCAP's 5-star rating, while CO2 emissions from its 500cc plug-in hybrid powerplant are very low – just 99g per km. Toyota will build iQ in Japan, and expects to make 100,000 cars in 2009, its first full year of production.

Toyota is also working on plug-in hybrids, and anther concept, the 1/X, combines plug-in hybrid and flex-fuel technologies. This car is also extremely light. “It weighs only 420kg, a third of the Prius, but offers the same interior room,” sid Formic. It can also cover 100km (62 miles) on just over 2 litres of fuel.