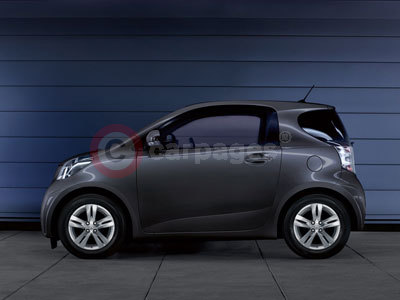 The Toyota iQ, the world’s smallest four-seat car, gains a new engine option with the addition of a 1.33-litre Dual VVT-i petrol unit with Toyota Optimal Drive technology. Presented for the first time at the Geneva motor show, the new engine option will be available in the UK from late July, offered alongside iQ’s established 1.0-litre VVT-i petrol engine.

Stop & Start can reduce fuel consumption by up to three per cent, depending on driving conditions. The system automatically stops the engine when the gear lever is moved to neutral and the clutch pedal is released, improving fuel economy. The engine automatically restarts, in less than half a second, when the clutch pedal is depressed again. This rapid restart is made possible by a permanently engaged gear mechanism in which the starter motor and flywheel are linked, via a ring gear, by a one-way clutch.

The system is maintenance-free and not only eliminates the torque limitations of a belt-driven starter motor, it also reduces noise and vibration in cabin during engine start-up.

Using the six-speed manual transmission, the iQ 1.33 returns 58.9mpg* in combined cycle driving with CO2 emissions of 113g/km. On models equipped with Multidrive the figures are 55.4mpg* and 120g/km*.

The new engine will be featured in a new iQ3 (iQ cubed) grade, with dedicated 16-inch alloy wheels and further specification which will be announced closer to the on sale date.

In spite of its compact dimensions, iQ has been designed to offer the highest levels of occupant protection and is fitted as standard with a comprehensive range of active and passive safety equipment.  As well as a robust, multi-load path body structure, iQ has nine airbags and benefits from advanced steering assist Vehicle Stability Control (VSC+) and dynamic stability technology. The effectiveness of these measures has been independently proven by a top five-star safety rating under the new, more stringent Euro NCAP crash test criteria.