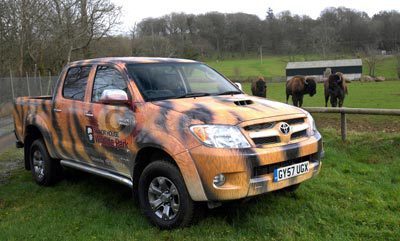 Anna Ryder Richardson, a star survivor of last year's 'I'm a Celebrity, Get Me Out of Here!', knows just what it takes to tackle tough environments. That's why the celebrity TV interior designer has chosen a pair of Toyota Hilux to ride the range of her very own safari park.

The Toyota Hilux is renowned the world over for its go-anywhere character - only last year it became the first car to be driven across the ice to the Magnetic North Pole. Now it is mixing it with the zebra, camels, reindeer and other exotic creatures that roam the zoo that Anna and husband Colin bought last year.

The trials and tribulations the couple faced after they swapped their luxury lifestyle to take over the rundown wildlife park in west Wales have been captured in a new TV special, Chaos at the Zoo, screening next Sunday 30 November at 9:00pm on Channel 4. Their Hilux 4x4 pick-ups, supplied by Toyota, reflect Anna's flair as a designer, finished in tiger and zebra-stripe paintwork that's the last word in jungle style.