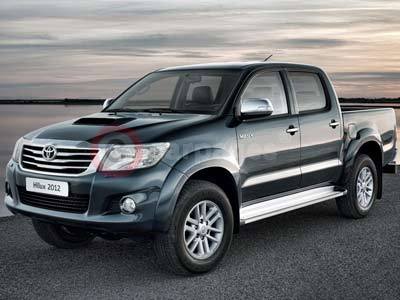 For 2012, the Toyota Hilux receives a new look and a number of new features. The re-style goes from the A-Pillar forwards, including a new bonnet, radiator grille, headlamps and bumper. Also available are new wheel designs and new side bats and steps for the Toyota Hilux Invincible.

For the interior, the Toyota Hilux sees new dashboard design with integrated 6.1 inch touchscreen and a horizontal instrument cluster. The Touch package is included as standard on the Toyota Hilux HL3 and Invincible which features Bluetooth and a USB port for music players.

Engine options for the 2012 Toyota Hilux remain the same - 142bhp 2.5 D-4D and 169bhp 3.0 D-4D units - and, due to a diesel particulate filter, are now complaint with Euro 5 light commercial vehicle emissions standards which will be introduced next year.

Carried over from the previous generation Toyota Hilux are the standard fit five speed manual transmissions and optional five-speed automatic (available for the 3.0 D-4D engine), as are the grade options of HL2, HL3 and Invincible and the choice of single, extra and double cab bodystyles.