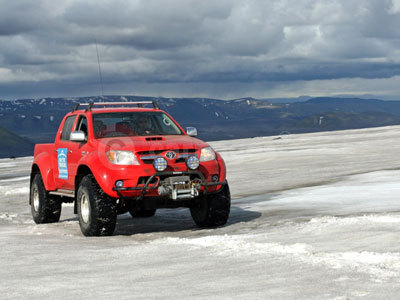 Millions of television viewers around the world witnessed the mighty Toyota Hilux becoming the first car to be driven to the Magnetic North Pole, with Top Gear's Jeremy Clarkson at the wheel. Now intrepid drivers have the chance to get behind the wheel of a similarly awesome Toyota Hilux and test their skills across the frozen wastes in a new range of adventure off-roading tours.

Reykjavik-based Arctic Trucks, the specialist company which engineered the Toyota Hilux to cope with the extreme conditions of the Top Gear challenge, is offering trips of between two and five days and longer expeditions through the wild landscape of Iceland. Its fleet of vehicles includes two Toyota Hilux Invincible Double Cabs equipped with special features to meet the demands of tackling the country's tundra, glaciers, lava fields and mountains, including a set of giant 38-inch tyres that allow the vehicle to traverse deep snow and thin ice.

Arctic Trucks began business as part of Toyota Iceland in 1990 and has since built up impressive experience and a worldwide reputation for modifying 4WD vehicles for use in extreme conditions. Toyota models prepared by the company have supported expeditions to both the North and South poles, outperforming more familiar arctic vehicles such as half-tracks and Snowmobiles.

Those looking to enjoy the benefits of Toyota Hilux ownership for more everyday driving duties can take advantage of Toyota's new 2010 revised model range. Notably the Toyota Hilux's 2.5 D-4D has been given a 20 per cent increase in power and more torque, significantly enhancing performance. The high-power 3.0 D-4D engine is now exclusively available in the Invincible Double Cab.

More than 12 million Toyota Hilux have been sold globally since its 1972 debut, and in terms of annual sales it ranks as Europe's most popular pick-up.