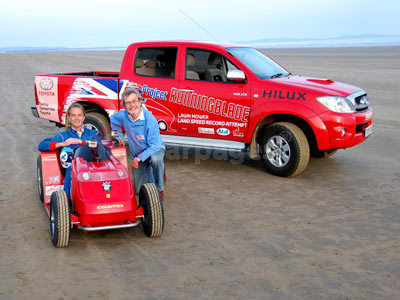 Toyota's legendary pick-up, the Toyota Hilux, crowned indestructible by BBC's Top Gear, and present at the recent eruption of Iceland's Eyjafallajokull volcano, is supporting Project Runningblade, the British attempt on the world land speed record for a lawn mower on 22nd - 23rd May 2010 at Pendine Sands, South Wales.

The purpose of the project is to build a conventional lawn mower, still capable of cutting grass, but adapt it to drive at speeds reaching 100mph. Driven by Don Wales, nephew of Donald Campbell, the aim is an attempt to smash a previous 80.7929 mph record, set by Bob Cleveland at Bonneville Salt Flats, USA, in 2006.

The team has been using a 3.0-litre D-4D Double Cab Toyota Hilux as their key support vehicle throughout the project, transporting the 'super mower' to the final event at Pendine Sands.

"We are enormously impressed with the Hilux's performance," says Stephen Vokins, Team Principal and leader of the project.

"The four-wheel drive capability and the load space have also been extremely useful to the team, and the Hilux regularly transports the mower to shows around the country in the build-up to the record attempt."

In addition to claiming the record for Britain, the project also aims to raise money for Great Ormond Street Hospital and Wessex Heart Beat.