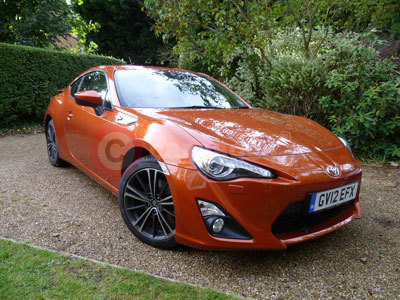 Toyota is the world’s biggest producer of cars, and the Japanese company has quite a serious reputation, best known for its small coupes and its very successful hybrid the Prius. But it has its fun side too, as some of the sports cars it has made in the past verify – such as the MR2, Celica and the 2000GT that earned lasting fame when it featured in the Bond film ‘You Only Live Twice’. Now here is Toyota’s new generation sports coupe, the GT86.

Designed as a two-door, 2+2 seater with a front engine and traditional rear-wheel-drive, the GT86 is intended to be fun to drive and to add some glamour to the Toyota range. It achieves both aims. Classically styled with a long nose and sloping tail, it looks the part too. Toyota developed the car jointly with another Japanese manufacturer, Subaru, and it is powered by Subaru’s horizontally-opposed ‘boxer’ engine and produced in Japan at a Subaru factory.

Newly on the market in the summer of 2012, the GT86 is available with a manual gearbox at £24,995, or with an auto box with a sequential manual-shift option and steering column paddle shifts at £26,495.

A manual gearbox version is available, but the model we tested was equipped with the six-speed automatic transmission, and it suits the car pretty well. The CO2 output is 164 g/km, putting the car in VED band G for the annual road tax disc. Its combined fuel economy figure nudging 40 mpg suggests that the fuel bill should not be too outrageous for a car with this performance.

Toyota GT86 Images may not be UK specification cars. Colours and exterior and/or interior elements may differ from actual models.