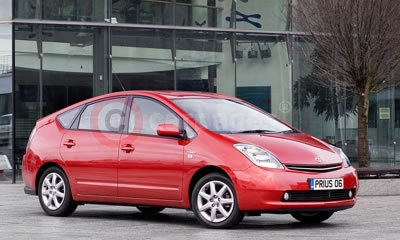 Toyota’s pioneering work in developing and implementing environmentally friendly hybrid and diesel technologies has been rewarded with the 2006 Green Award from What Car? magazine.

The award recognises Toyota’s industry leading commitment to building cars that address the need for cleaner and more efficient powertrains, without compromising the standards of performance and practicality expected by today’s motorists.

In the words of What Car?: “Its clean and green cars are not futuristic concepts with on sale dates somewhere over the horizon. Toyota has a range of environmentally friendly cars in its showrooms today.”

The models referred to are the Toyota Prius, the world’s best-selling hybrid power vehicle and the 2005 European Car of the Year, and the Lexus RX 400h, Europe’s first hybrid power SUV.

The Prius is the world’s cleanest family-sized production car, capable of exceptional fuel economy thanks to Toyota’s Hybrid Synergy Drive, a system that combines a petrol engine with a powerful but compact electric motor. In slow moving city traffic, Prius can run on its electric battery alone, producing zero exhaust emissions, while on the open road the petrol engine, supported when required by additional electric motor power, ensures performance to match conventionally-powered cars.

Thanks to the system’s self-recharging capability, Prius does not have a limited range like a fully electric vehicle and does not have to be taken off the road for battery power to be topped up.

A development of Hybrid Synergy Drive also powers the Lexus RX 400h, a luxury 4x4 that achieves both high performance and excellent fuel economy, a combination hitherto unknown in its segment. Equipped with a 3.3-litre petrol V6 engine and front and rear electric motors, the RX 400h can move from rest to 62mph in 7.6 seconds, yet is capable of returning 34.9mpg in combined cycle driving, a figure that’s unmatched by any other premium SUV model. The twin motor arrangement also gives the RX 400h automatic electric four-wheel drive capability in low-grip driving conditions.

Lexus’s hybrid power model range will grow this spring with the launch of the new GS 450h. And looking further to the future, Toyota is well advanced in developing zero-pollution power, having last year become the first manufacturer to achieve vehicle type certification for a vehicle using hydrogen fuel cell technology.

D-CAT, which includes Toyota’s unique four-way, maintenance-free DPNR catalyst system, features in the 2.2-litre D-4D 180 engine. This unit is already available in the Verso and will soon be launched in the new generation RAV4 and the Avensis range. Not only is this engine the most powerful in its class, it is also highly fuel efficient and produces record low levels of combined nitrogen oxides (NOx) and particulate matter (PM) emissions.

Environmental concerns are at the heart of Toyota’s worldwide operations, its corporate approach built on the framework provided by the Toyota Earth Charter of 1992. Following these principles, Toyota continues to make huge investment not only in building cleaner vehicles and engines, but also in establishing production processes and working practices - including co-operation with other businesses and organisations - that have less harmful impact on the world around us.