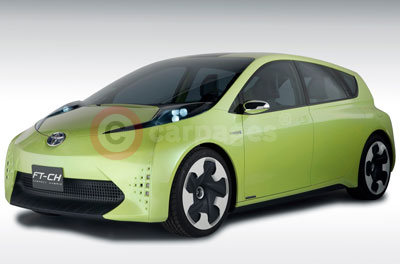 Toyota has unveiled the Toyota FT-CH dedicated hybrid concept at the North American International Auto Show (NAIAS) in Detroit. The Toyota FT-CH is a concept that meets Toyota's strategy to offer a wider variety of full hybrid choices to its customers, in addition to the introduction of plug-in hybrids (PHVs) and battery electrics (EVs) in model year 2012, and hydrogen fuel cell vehicles (FCHVs) in 2015 in global markets.

The CH stands for compact hybrid as in compact class and it's a concept that can best be defined by comparing it with the mid-size class Toyota Prius. The Toyota FT-CH captures the spirit and functionality of a car that thrives in the inner-city environment; sized right to be nimble, responsive and manoeuvrable.

The Toyota FT-CH was styled at Toyota's European Design and Development (ED²) centre in Nice, France. Compared to the Toyota Prius, it is 22 inches shorter in overall length, yet loses less than an inch in overall width. In spite of its compact external dimensions, Toyota FT-CH was designed for maximum passenger comfort and interior roominess, with an imaginative sense of style.

ED² designers looked to capture the vivid, high-energy appeal of what has come to be called the 8-bit generation. Popularised in the early 80's, 8-bit microprocessor technology dominated the budding home video game industry. Today, 8-bit is considered a specific retro-style that is embraced by such things as 8-bit genre music and 8-bit inspired art.

The direct reference to the 8-bit generation is meant to be fun and innovative, colourful and stylish, with strong appeal to young buyers. Lighter in weight and even more fuel efficient than Prius, the concept specifically targets a lower price point than the Toyota Prius, thus appealing to a younger, less-affluent buyer demographic.

In the early 2010s, Toyota plans to sell a million hybrids per year globally, a majority of those in North America. To accomplish this, Toyota will launch eight all new hybrid models in the USA over the next few years. These will not include next generation versions of current hybrids; instead, they will be all new dedicated hybrid vehicles, or all new hybrid versions of existing petrol engine models.

For the last decade Toyota's focus has been to concentrate on a comprehensive advanced technology strategy including EVs, PHVs, and FCHVs. Common to all three is the move to electrification, the full commitment to advanced battery technology and how lessons learned from conventional hybrid R&D have given Toyota a leg-up on all three.