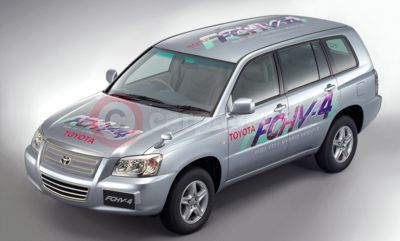 The dawn of a new age in motoring clicked a few minutes closer this week as Toyota announced its hydrogen fuel cell powered SUV has become the first such vehicle in Japan to acquire vehicle type certification under the Road Vehicles Act by Japan’s Ministry of Land, Infrastructure and Transport (MLIT). Leases for the vehicle are to begin on 1 July.

The announcement comes within a week of Toyota revealing its intention to commercially market hydrogen vehicles by 2015. Toyota became the world’s first car maker to market fuel cell vehicles in December 2002 with 11 cars leased in Japan and five in the U.S.

Fuel cell powered cars will replace the petrol or diesel engine with a hydrogen fuel cell – a method of making electricity from hydrogen gas with only water as the ‘exhaust’ product.

Throughout the development of fuel cell vehicles Toyota has been independently developing all major fuel cell system components, including the all-important, electricity-producing fuel cell stack.

The type approval relates to a new and improved version of Toyota’s Fuel Cell Hybrid Vehicle, the Kluger V. Data gathered during the use of the previous models was fed back into development, resulting in the new model, which features a fuel cell system with enhanced levels of reliability and durability.

The vehicle will be offered to such customers as national and local governments, and companies in energy-related fields.

Toyota is also active in applying its fuel cell technology to buses having conducted real-world verification tests with a fuel cell bus prototype operating within Tokyo's metropolitan public bus system (from August 2003 to December 2004). Toyota now has eight units of its FCHV-BUS transporting visitors between the Nagakute and Seto areas of the 2005 World Exposition in Aichi, Japan.

* In the 10-15 Japanese test cycle; as based on TMC calculations