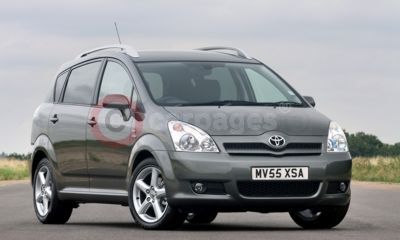 The Toyota Corolla Verso set new standards in the compact MPV market when it was launched in 2004, with a sporty, dynamic design, true car-like driving performance, superb interior versatility with its Easy Flat-7TM folding rear seat system and a top five-star ranking for passenger safety in Euro NCAP testing.

The introduction of engines from Toyota’s new generation of D-4D power units increases the appeal of the Corolla Verso even further. Two 2.2-litre units are offered: the D-4D 140, which replaces the 2.0-litre D-4D engine in the range; and the D-4D 180, which is the most powerful and cleanest engine in its class, developing 175bhp and using Toyota D-CAT (Diesel - Clean Advanced Technology) to achieve ultra-low exhaust emissions.

The D-4D 180 is the first true high-power diesel to be launched in the compact MPV segment. It develops 175bhp and 400Nm of torque at 2,000rpm, giving the car sporty but smooth performance, with 0-62mph acceleration in 8.8 seconds and a top speed of 128mph. Combined cycle fuel consumption is 42.8mpg.

The Toyota D-CAT (Diesel - Clean Advanced Technology) in the D-4D T 180 gives the engine the lowest combined nitrogen oxides and particulate matter (NOx and PM) emissions of any diesel engine on the market. Central to this radically low emissions performance is the Diesel Particulate NOx Reduction (DPNR) four-way catalyst, a maintenance-free unit that simultaneously reduces the levels of NOx, particulate matter (PM), hydrocarbons (HC) and carbon monoxide (CO) in the engine’s exhaust.

The engine uses piezoelectric injection technology, which means larger volumes of fuel can be injected more quickly than with conventional injectors. This in turn delivers better fuel atomisation and more precise injection timing. It also has the lowest compression ratio in its segment, 15.8:1, which means less effort is required to compress the fuel-air mixture. This in turn results in higher efficiency, better performance and lower fuel consumption.

The D-4D 180 is equipped with the latest Toyota-engineered ceramic glow plugs. They are more durable and reach their ideal operating temperature more quickly, which enables more rapid cold starts at lower air temperatures.