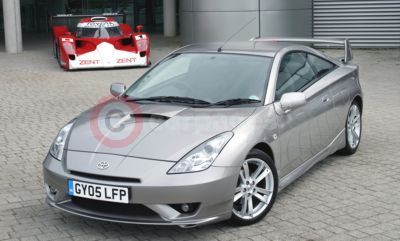 The last Toyota model in Europe to be launched with a GT badge was the mighty GT-One Le Mans racer, a no-compromise, thoroughbred machine that powered to a new lap record in the 24-hour contest in 1998.

Just as that supercar returns to the track this summer as one of the stars of the Goodwood Festival of Speed, Toyota is reviving the evocative GT classification for a new flagship version of its roadgoing Celica sports coupe.

The GT adds exciting new dimensions to the Celica, both in terms of styling and performance. It has always been one of the sleekest and most distinctive cars on the road, with a low and lean profile that’s as fresh now as when it was first released in 1999. In its new GT trim it hugs the road even closer, thanks to lowered suspension and a complete body kit with side skirts, front air dam and a muscular rear spoiler mounted on the tailgate.

The visual impact is reinforced by a set of dedicated 17-inch alloy wheels with GT wheelcaps, while in the cabin sports and luxury themes combine in Alcantara suede-effect upholstery and a special knob for the gearshift, both unique to the GT model. The car also benefits from a sound system with a six-disc CD autochanger.

The Celica GT might not muster the 600bhp delivered by the GT-One with its twin-turbocharged V8, but it’s a potent performer thanks to the combination of its 190bhp 1.8-litre VVTL-i engine, superbly balanced chassis and six-speed close ratio manual transmission: nought to 62mph is despatched in 7.2 seconds and top speed is 140mph.

Before then crowds will enjoy the rare spectacle of the Toyota GT-One in action at the Goodwood Festival of Speed on 25 and 26 June, piloted by Japanese Formula 1 legend Ukyo Katayama, a member of the Le Mans record-breaking squad.

Toyota Celica Images may not be UK specification cars. Colours and exterior and/or interior elements may differ from actual models.