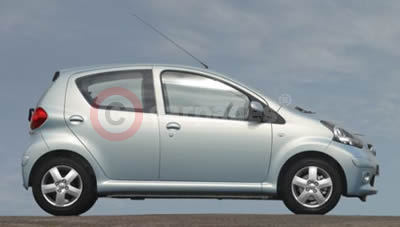 The Aygo, pronounced I-Go, is part of the trilogy with Peugeot and Citroen in producing a new breed of affordable small car for Europe. Each one of the three makes will use the same core car but each will have its own distinctive appearance, marketing and pricing strategy.

The Aygo, with estimated prices, depending on model, ranging from under £7,000 to £8,000, will be in dealer showrooms in June and on sale from 1 July. Citroen’s version, the C1 will be on sale in the UK in June with an expected slightly lower starting price and Peugeot’s 107 will also be on sale from 1 July with a yet to be confirmed starting price of around £7,000. Currently all three British operations of the three manufacturers are keeping the confirmed prices close to their chest such is the competition in this market sector.

The Aygo say Toyota UK is being marketed at young customers, first time new car buyers with urban mobility for a new generation and their promotional activities with trendy youthful events will reflect this view. Toyota say they are targeting conquest sales and expect only 10 per cent of Yaris owners to down-size to the Aygo even after the next generation, and much bigger Yaris, is launched next year.

Industry pundits say this may or may not eventually be the case. Mini has succeeded in this type of trendy youth marketing assumption. Smart with the forfour and Renault with the Modus has not. It is a competitive sector with loads of alternatives, not least of all the new 107 and C1 not to mention the Fiat Panda, the VW Lupo, Vauxhall Corsa, Daihatsu Sirion plus others from Kia and Hyundai. Who the eventual buyers turn out to be will be interesting, the money is on the usual culprits, the two and three car families, the commuter, city user, older man and older woman, indeed anybody who might just have a Toyota dealership near them.

The Aygo, C1 and 107 use the same Toyota designed floorpan and running gear and are built in £1bn investment factory funded jointly by PSA and Toyota. The facility was designed and equipped by Toyota and can produce 300,000 cars a year. It is situated at Kolin in the Czech Republic which chosen because of its central European position for the supply of parts and because of the ample availability of less costly workers. This is now one of eight Toyota vehicle production facilities in Europe.