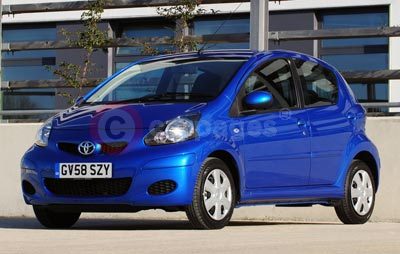 The Toyota Aygo is a success story in miniature. Since launch in 2005 this small but perfectly formed Toyota has amassed more than 100,000 sales a year across Europe, its combination of low cost of ownership, contemporary styling and fun-to-drive character making it a top performer in the expanding A-segment.

Now the factors that have made the Toyota Aygo a winner have been further sharpened to make it an even stronger proposition. The result is the new 2009 Toyota Aygo, on sale now.

The revised Toyota Aygo range includes two new feature models, Aygo Blue and Aygo Black, with exclusive equipment specifications, plus the established Aygo and Aygo+, in three and five-door body styles. All are powered by the Engine of the Year class-winning 1.0-litre VVT-i petrol unit, with five-speed manual or MultiMode transmission.

Toyota's three-cylinder 1.0-litre VVT-i petrol engine, a category winner in the International Engine of the Year awards in 2007 and 2008, now benefits from the application of Toyota Optimal Drive, a raft of technologies that deliver greater efficiency, improved performance and lower emissions.

The engineering improvements that make this possible include a new cut-off system that saves fuel during gear changes and the adoption of low viscosity oil for less engine resistance.

With its all-aluminium construction, the 1.0-litre VVT-i is the lightest internal combustion engine on the market, weighing just 67kg. It is also the most powerful in the A-segment, producing 67bhp (68 DIN hp), and it delivers class-leading torque of 93Nm at 3,600rpm.

To provide better driveability in urban traffic, the development team worked to ensure strong torque at low to medium engine speeds by optimising the intake system, setting the appropriate manifold length and giving the intake ports a smaller diameter. The three-cylinder configuration also promotes the availability of torque in the low to mid-range, with less 'metal' to move at lower speeds.

The engine remains remarkably fuel-frugal, with consumption improved from 61.4 to 62.8mpg in combined cycle driving with five-speed manual transmission (the figure is unchanged for versions with the MultiMode gearbox at 61.4mpg).