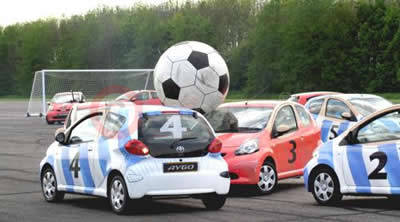 The football season reaches its Cup Final climax this weekend, but there’s more than one crunch game for fans to enjoy. Toyota has teamed up with BBC motoring show Top Gear to give the beautiful game a whole new dimension with a soccer tie between cars.

Toyota kitted out 10 brand new models in team strips for a big match to mark the launch of its new city car, the Aygo (pronounced I-go).

The teams were skippered by Top Gear presenters Richard Hammond and James May, who personally picked their players - not Premiership heroes but top British racing drivers.

It was a game of two halves and both sides fought like true professionals. But with the new Aygo’s starting price coming in at less than £7,000, these teams proved much cheaper than your average soccer star.

The high octane five-a-side match saw some axle-crunching tackles that needed more than a swipe with a cold sponge to put right, but the Aygos took it all in their stride. And Gary Lineker and his pundits couldn’t fail to be impressed with the top quality cornering on display.

A Toyota spokesman said: "The Aygo is all about having fun, so what better way to demonstrate that than with a game of footie.

"Players may have been swapped for cars, but that didn’t make it any less thrilling than a real match.

"The drivers were really competitive and had a ball. And as in any good match, the squad didn’t escape without some knocks and bruises, but we’ll soon have them patched up."

You can catch the game, the final score and all the post-match analysis in the first in a new series of Top Gear on BBC2 this Sunday (22 May) at 8pm.