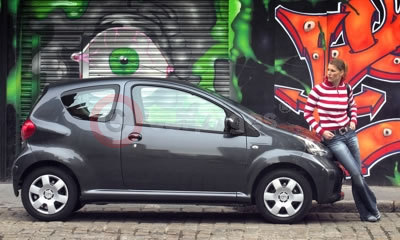 The Aygo is not only one of the best value machines on the market, it’s every bit as brilliant as a supercar that’s almost 120 times more expensive to buy. That’s the opinion of BBC Top Gear magazine, which has awarded its 2005 Car of the Year title jointly to Toyota’s Aygo and the Bugatti Veyron.

Aygo has brought a new dimension to the city car market, with its great driving character, contemporary style and superb value for money. And being priced from £6,745 on the road, it’s a more realistic prospect for motorists to buy than the Veyron, at around £810,000. It’s easier to park, too, has two extra seats in the back and there’s room for your shopping in the boot. It won’t hit 250mph, but it’s nimble enough for a Top Gear game of five-a-side football, a skill the Veyron has yet to demonstrate…

Aygo’s top honour was the crowning glory among a series of Top Gear gongs to set the mantelpiece groaning. In addition to the Car of the Year award, Aygo also picked up a “Jeremy” as Best Small Car, while Toyota’s sister brand, Lexus, marched off with Best Executive/Luxury Car for the new IS 250.

In the recent Top Gear survey Lexus recently also took awards for the RX 300 and IS models in the 4x4/SUV and Executive/Luxury categories respectively as well as winning the overall manufacturer category.