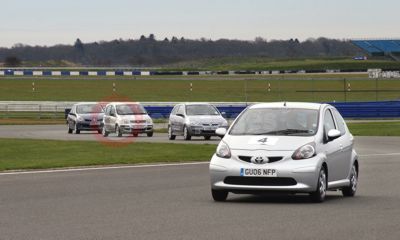 Ten laps of a world-famous motor-racing circuit can rarely have yielded a fuel consumption figure of just over 90mpg, but that was the astonishing result produced by a Toyota Aygo 1.4 D-4D diesel hatchback at Silverstone this April.

The event was the first GreenFleet Fuel Challenge, designed to demonstrate the efficiency of low-emission cars and light commercials, and reveal those able to offer the greatest benefits for fleets. The trials formed part of the GreenFleet Arrive 'N' Drive day, attended by fleet managers from across the UK.

The five-door Toyota Aygo, driven by Chris Rutherford and Laurie Mills from the London Borough of Islington, turned out to be the top-performing car in the Eco Band B category (CO2 emissions of 101-120g/km). The hatchback achieved 90.17mpg when driven 10 times around the Silverstone circuit, with participants briefed to cover the 32.5-mile distance in under an hour. Twenty vehicles took part in the event, six of them in Eco Band B. They were independently checked before and after the race by Millbrook Testing, and competitors pre-briefed on defensive driving techniques by the Institute of Advanced Motorists. In each case the first circuit was driven by a Silverstone ARDS instructor, and there were two ‘pit-stops’ as one fleet driver and then his colleague took the wheel.

A later event involving three identical Toyota Avensis 2.2-litre petrol cars underlined the effect drivers have on fuel consumption. An IAM driver and a fleet manager both achieved around 56mpg, while a Silverstone instructor briefed to drive aggressively managed only 18mpg!

With CO2 emissions of only 109g/km, the Toyota Aygo is one of the cleanest cars on the market. The 55bhp diesel version has a top speed of 95mph, 0-62mph acceleration of 16.8sec and a combined consumption figure of 68mpg.

"The Aygo’s official extra-urban consumption is 83mpg, and Chris and Laurie bettered that by more than 10% on the GreenFleet circuit," said Kevin Ledgar, Toyota Fleet’s Marketing and Planning Manager. "Company drivers may not drive this carefully in the course of business, but these drivers certainly showed what’s possible.

"The Toyota Aygo is amazing people with its potential in both diesel and petrol form, and while everyone is talking about fuel costs and emissions, it offers a very strong proposition for businesses that require only small cars. Our thanks to the GreenFleet organisers Public Sector Events for what was a very good day at Silverstone."