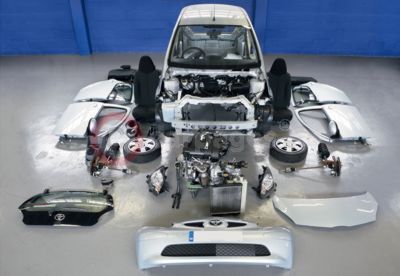 Few cars on the market are as light and as simple in construction as Aygo. To demonstrate the model’s fundamental simplicity, a team of apprentice technicians succeeded in reducing a regular road-going Aygo to its component parts in just five hours.

The task was undertaken by three young men who are enrolled in Toyota’s ground-breaking training scheme at Aylesbury Young Offenders Institution, guided by their course leader.

Following the engineering tradition of finding out how something works by taking it apart and putting it back together again, they wasted no time in breaking down the Aygo into a giant kit, using only standard tools. What made their achievement all the more remarkable was the fact none of them had worked on an Aygo before. The full story of their feat can be read in the latest issue of Top Gear Magazine, on sale from 3 August.

Toyota’s motor vehicle training facility was established at Aylesbury YOI in 1998, giving prisoners the opportunity to work towards a Level 3 Technical Certificate accredited by the Institute of The Motor Industry. Operating to exactly the same standards as Toyota’s other UK training centres, the 18-month course has so far trained more than 70 vehicle technicians. Of these, 18 have subsequently gone on to find careers in the motor industry.

Tipping the scales at 790kg in three-door form, Aygo is lighter than most city cars and even the sporting Lotus Elise. Reducing weight and using simpler construction techniques are key factors in achieving the best possible fuel economy: Aygo’s 67bhp 1.0-litre VVT-i three-cylinder petrol engine, which at 67kg is the lightest internal combustion engine on the market, delivers 61.4mpg in combined cycle driving. The light weight also contributes to Aygo’s rewarding handling performance.

The extent of Toyota’s clever engineering can be seen in simple comparisons with Yaris, which was the smallest model in the manufacturer’s range until Aygo’s arrival and has itself enjoyed wide critical acclaim for its styling and economy.

Being made of glass, Aygo’s tailgate has a thinner structure section than a conventional hatch. It comprises six parts, compared to 12 on the Yaris, and weighs about four kilos less.

On the five-door model, the rear doors each use seven fewer parts than on the Yaris, again with a weight saving of around four kilos. And inside the car, front seats with integrated headrests also have fewer components and weigh less.

With Aygo, Toyota challenges the perception of simple meaning cheap. Instead it targets style through simplicity, for example in the use of internal door panels that match the car’s exterior body colour.

However, the efforts to reduce weight and the number of parts do not compromise the car’s essential robustness. Aygo’s tough character is witnessed by a four-star rating for passenger crash protection in official Euro NCAP testing.