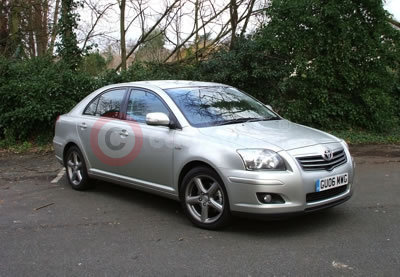 It may be Toyota’s European flagship model but a straw poll amongst friends revealed that it is considered bland.

I’ll admit that the Avensis, particularly the older versions, is a favourite with mini-cab drivers almost to the point of being a cliché. But clichés happen for a reason and in this case it’s because it is a good all-round car and it just got better.

The current version of the Avensis was launched in 2003 and has recently undergone some restyling and re-engineering for 2007 and gained two new diesel engines in the process.

Cosmetically, the changes amount to a revamped front end featuring a new grille and bumpers and the indicators are now integrated into the revised door mirrors for increased visibility. The rear end gains new light clusters and minor styling changes.

The Avensis remains available in hatch, saloon and Tourer estate versions so there’s something for everyone, which is especially valuable if the car is used for both work and family. There are no less than six trim levels to choose from including the new T180.

The T2 trim now has an improved MP3 compatible CD player with a Digital Sound Processor and Automatic Sound Leveliser. Even this base model has nine airbags, including one to protect the driver’s knees.