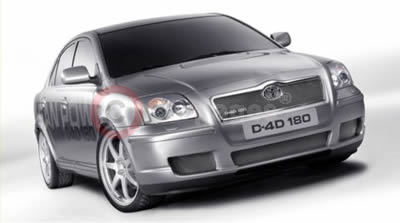 The Avensis has been a hugely successful car for Toyota in Europe. Now its driver appeal is to be increased with the introduction of two new 2.2-litre D-4D diesel engines. These will give the Avensis one of the most comprehensive product ranges in the D segment with three diesel (2.0, 2.2 148bhp and 2.2 175bhp) and four petrol (1.6, 1.8, 2.0 and 2.4) units. They also build on the Avensis’s achievement of offering an engine range fully compliant with Euro IV emissions standards, right from day one.

The first of the two new diesels to reach the UK market will be a 148bhp 2.2 D-4D unit. This uses a second generation common rail system to help achieve an excellent balance of performance and economy. The engine’s preliminary performance figures show 0-62mph acceleration in 9.3 seconds and combined cycle fuel consumption of 47.1mpg.

The second phase of the new diesel engine development will come in early 2006 with the introduction in the UK of a 175bhp version of the 2.2 D-4D that will launch Toyota’s revolutionary new concept for diesel engines, Clean Power. Clean Power features some of the world’s most innovative diesel technologies, some of them unique to Toyota.

Thanks to the incorporation of Toyota D-CAT (Diesel Clean Advanced Technology), the 2.2 D-4D Clean Power has the lowest combined NOx and PM emissions of any production diesel engine. At the same time, the engine also offers segment-leading levels of power and torque, 175bhp and 400Nm between 2,000 and 2,600rpm; the lowest levels of noise, vibration and harshness (NVH); and on average 20 per cent lower fuel consumption than engines of equivalent power output (target combined fuel consumption for the saloon model is 46.3mpg).

The two engines are being introduced together in other European markets, but in the UK their launch is to be staggered with the more powerful 2.2 D-4D Clean Power engine set to join the Avensis range at a later stage in the model’s life cycle. This decision takes into account the particular market conditions for D segment diesels in this country and the different specification structure for UK Avensis models.

Both engines are being built by Toyota Motor Industries Poland (TMIP) at Toyota’s newest factory in Europe. Toyota invested €200 million (approximately £140 million) to create the facility in Jelcz-Laskowice, which has an annual capacity of 150,000 engines and a work force of around 500 people.