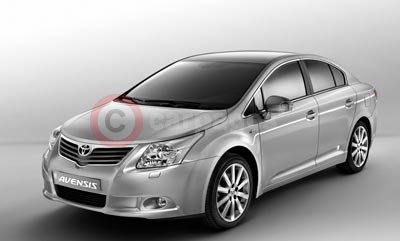 The Rt Hon. Geoff Hoon MP, Secretary of State for Transport, will officially launch the start of production of the all-new Toyota Avensis, during a visit to Toyota's Burnaston Plant, Derbyshire on 21st November 2008.

During his visit, the Secretary of State for Transport will tour the Toyota Avensis production lines meeting with workers and management from Toyota's UK and European operations, before witnessing the Avensis - Toyota's flagship model for Europe - drive off the end of the production line to mark the official start of production of Toyota's new D-segment car.

The event will be attended by an audience of over 300 employees and invited guests including, Toyota Avensis suppliers, Unite the Union, local government, local community and representatives from the media.

Speaking ahead of the visit, The Secretary of State for Transport said: "The investment Toyota has made in this new model is a real vote of confidence in both the workers at the Burnaston and Deeside plants and in the future of car manufacturing in the UK. The start of production marks a confident new chapter for the company, which is particularly important in these challenging times, but it also represents a vital boost for local jobs and the regional economy."

The event was also welcomed by The Secretary of State for Business, Lord Mandelson, who added: "The automotive sector plays a vital role in ensuring the success of the UK economy. Our car industry has a highly skilled workforce and is one of the most efficient and productive in the world. Today's launch of the new Avensis by Toyota demonstrates the company's commitment to the UK. This level of commitment is vital if the UK is to remain a key competitive player in the global market. During these tough times, the government will continue to work closely with companies, like Toyota, to secure future investment and ensure that the UK remains the location of choice for manufacturers, however large or small."

Mr Katsunori Kojima, Managing Director of Toyota Manufacturing UK added: "Our world class team here in the UK continues to deliver the quality, efficiency and flexibility needed to meet the demands of our customers. In challenging economic conditions, the new generation Avensis offers customers advanced fuel saving technologies, reduced emissions, as well as enhanced levels of safety. This truly reflects our commitment to delivering the right cars, for the right place, at the right time."