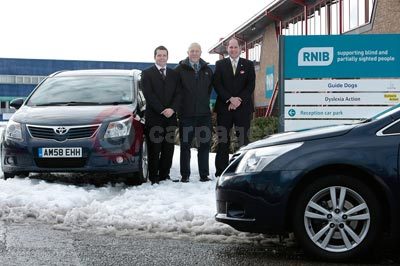 Green credentials, competitive rates and the timely launch of the new-generation Toyota Avensis with Toyota Optimal Drive have led the Royal National Institute for Blind People to switch its 80-strong car fleet to Toyota.

The RNIB is the UK's leading sight-loss charity, offering information, support and advice to more than 2 million people. Administration Manager Alan Miles, who is based at the organisation's production centre in Peterborough, was responsible for proposing and managing the changeover.

"Our existing agreement was coming to an end and, bearing in mind the economic climate, and also a drive within RNIB on environmental issues, the time was right to have a close look around," said Mr Miles.

The RNIB had used only Ford cars for the previous nine years. Now, as existing vehicles come up for renewal or new ones are required, Lloyds TSB Autolease will supply Toyotas on a contract-hire basis.

"It was useful for us that the new-generation Avensis had just been launched, so that a brand new model would be immediately available," said Alan Miles.

"Generally low CO2 emissions and, certainly with Auris and Avensis, the fact that UK build reduces shipping costs, were very much in Toyota's favour. Toyota came out strongly when indicative quotes across the manufacturers' ranges were compared. "The initial feedback from staff has been very positive."

Benchmark replacement cycle is four years or 70,000 miles, though Mr Miles points out that the widely varying mileages of staff call for a degree of flexibility within this framework. Drivers include management staff and consultants "covering the whole raft of services that the RNIB provides", some operating regionally and others nationwide.

With the Toyota Avensis now offering the benefit of Toyota Optimal Drive - a range of more efficient engines with increased performance, yet reductions in CO2 output and improved fuel economy - the first three cars to be ordered are two tourers and one saloon. Drivers have a free choice of appropriate Toyota models, subject to director approval, and most likely to be required are Toyota Avensis, Verso, Yaris and Auris.

"We don't have too many staff with company cars in London, but Prius is certainly also a good contender for its low emissions, tax benefits and congestion-charge advantages," says Mr Miles. At present 30% of the car fleet is diesel, though this too could be reviewed.

Alan Miles admits to being a Toyota enthusiast from personal experience. His private car is his third Toyota, a Corolla, and as he comes from Derby he is familiar with the manufacturer's Burnaston plant.

"I know what Toyota has achieved there and also what it's done for local industry," he says. "It wasn't a major factor in our decision, but it's all part of what makes the package more beneficial."