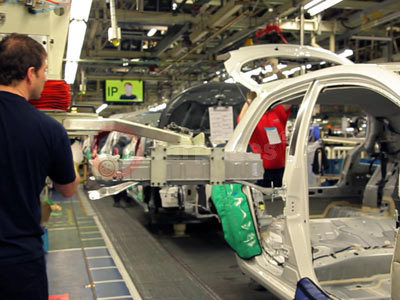 At a glance, the new Toyota Auris Hybrid is recognisably an Auris, with similar styling and proportions as the regular petrol and diesel powered models in the range. In fact almost 400 of its parts are different, calling for a major planning exercise to ensure smooth production at Toyota's Burnaston factory in Derbyshire.

The challenge for the Toyota Manufacturing UK (TMUK) team was not just that the full hybrid vehicle requires new components, tools and training for employees. Production of the car had to be seamlessly integrated into an existing assembly line that was already building standard Toyota Auris and Toyota Avensis models.

Liz McKenzie, TMUK's Assistant General Manager Manufacturing Planning, explained: "Our process design had to take into account the fact it takes around 11 minutes longer to make a hybrid than a standard Auris. To avoid this causing a bottleneck in production, they had to produce some unique processes where certain team members spend longer working on the hybrid model on the assembly line, and do not work on the regular Auris and Avensis models."

The line process also had to be adapted to ensure that the right set of parts for the right car is delivered to the teams on line, synchronised so that it arrives at each process station at the right time.

Elsewhere at Burnaston, the paint shop has had to be revised in order to produce the new White pearlescent paint introduced in the plant for the first time with the Toyota Auris Hybrid. And the Press and Weld shops have had to handle the different floor panels required for the car to provide space for the hybrid battery.

At the end of the assembly line, the vehicle inspection area has been reconfigured, principally to take into account the Toyota Auris Hybrid's silent running in EV (electric vehicle) mode when it is driven at low speed. The new layout is designed with employee safety in mind and a new internal "highway code" has been issued to alert everyone to the changes.

Further changes have been made to the Burnaston test track to ensure the Toyota Auris Hybrid can be tested in all of its drive modes.

Toyota's Deeside engine plant in North Wales has also introduced new processes and redesigned its test areas specifically to meet the requirements of the new 1.8-litre VVT-i petrol engine it is supplying for the Toyota Auris Hybrid's powertrain. Construction of the powerplant requires a large number of new components, including significant parts such as a new flywheel and low-friction pistons.