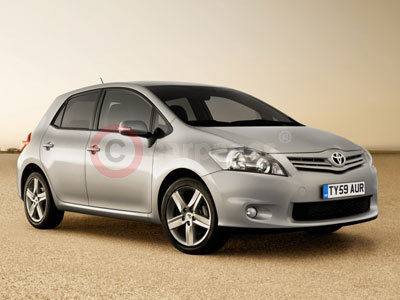 Toyota has launched its new Toyota Auris 2010, with a sharper appearance inside and out, higher quality materials throughout the cabin and a suspension system tweaked for extra ride comfort and stability. As well as packing much more visual appeal, the range of three and five-door hatchbacks continues to deliver a class leading combination of performance, fuel economy and low CO2 emissions from its line-up of Toyota Optimal Drive powertrains.

Rather than simple styling tweaks, Toyota has gone back to the sheet metal to give its new Toyota Auris 2010 more road presence and driver appeal. The front end has been comprehensively reworked with a new deep bumper with integrated fog lamps (TR and SR models), new swept-back headlamps, a revised bonnet profile with stronger crease lines and a grille that adopts the Toyota family identity established by the latest generation Toyota Avensis and Toyota Verso.

A soft-touch material has been introduced across the top of the instrument binnacle and around the glovebox, and the centre console has been revised with changes to the instrument design for smarter appearance and improved clarity. Toyota Auris's distinctive bridged centre console has a new silver finish that matches the doorhandles and the shape of the handbrake has been changed for easier operation and improved tactile quality.

Toyota Auris retains its current range of petrol and diesel engines and six-speed manual and MultiMode transmissions, all of which benefit from Toyota Optimal Drive technologies for reduced weight, higher efficiency and reduced emissions. Performance data is unchanged, but they continue to offer a strong balance of performance, fuel efficiency and low emissions.

The new Toyota Auris 2010 moves to a new three-grade line-up, with a new sporty SR grade joining the established T2 and TR models. The TR will remain at the heart of the range and is expected to account for around 80 per cent of the UK sales mix.

Key changes include the provision of a USB port and Aux-in socket to connect portable music players to the car's audio system, and a leather-trimmed flat bottom steering wheel on all models. Heated door mirrors are introduced on T2 grade, with an additional retracting function on TR and SR versions.