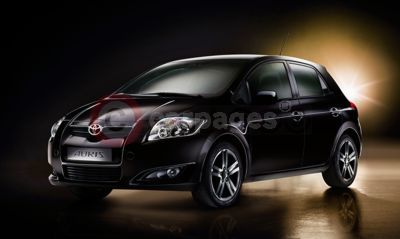 Today Toyota announces the first details of the Auris, a new core model in its range that will play a key role in advancing its brand ambitions in Europe. Auris, which is designed and built in Europe, will join Yaris and Avensis in spearheading the company's progress towards its newly-announced target of 1.2 million annual sales in Europe by 2008.

Auris has been created to meet the changing demands of the crucial C-segment family hatchback market. It offers a dynamic design and striking features and delivers the well-established hallmark Toyota values of superior quality, innovation and driving pleasure.

Designed From The Inside Out

In creating Auris, the designers worked from the inside out, an approach that maximises usable space in the cabin and ensures high levels of passenger comfort through elements such as a flat rear passenger floor and high window surfaces. Built on an all-new platform, Auris has an overall length of 4,220mm and a long, 2,600mm wheelbase, giving excellent stability and ride quality. With an overall height of 1,515mm and width of 1,760mm, it provides generous interior accommodation.

The interior is distinguished by innovative design that works to harmonise driver and passenger with the car. At the front the sculpted console forms a bridge that's not just elegant, but is practical, too, raising the gear lever and other controls to the perfect ergonomic height.

The design work was undertaken at Toyota's European styling studio ED 2, following the principles of Toyota's Vibrant Clarity design philosophy - forward looking and energetic, while retaining clarity of purpose and rationality. The production model retains many of the design cues from the Auris Space Concept, which Toyota premiered at this year's Paris motor show, including a high waistline, short overhangs and forward balance of the cabin architecture.

On the outside, Auris has a strong, dynamic appearance that expresses its driving character. The wide body and track give a stable look and the sharply-defined architecture of the car creates a crisp, fresh feel.

A Range For Today And Tomorrow

The Auris model line-up will cover the full range of current and future customer demand in the European C-segment. At launch it will be offered in three and five-door hatchback body styles with a choice of two petrol engines (1.4 VVT-i and 1.6 Dual VVT-i) and three diesels (1.4, 2.0 and 2.2 D-4D), all of which meet Euro IV emissions standards.

The 2.0-litre D-4D 130 engine has a power output of 124bhp and was first utilised in the 2007 Avensis, launched a few months ago. The 2.2 D-4D 180 is equipped with Toyota's unique D-CAT clean diesel technology, which simultaneously reduces nitrogen oxides (NOx) and particulate emissions.

A wide choice of gearboxes will be available, too, including a six-speed manual transmission fitted as standard on the 2.0 D-4D 130 and 2.2 D-4D 180. A MultiMode system with paddle shift controls will be available as an option on the 1.4 D-4D 90 and 1.6 Dual VVT-i engines.

Andrea Formica, Toyota Motor Europe Senior Vice-President Sales, Marketing and After Sales, said: "The C-segment is the most important segment in the European car market and many European brands are defined by the image and success of their C-segment models. With the launch of Auris we want to achieve a step-change, not only in sales volume, but also in terms of brand image for Toyota."

Auris will be presented for the first time at the Bologna motor show on 5 December. UK sales will start in February 2007, in advance of other European markets, which will offer the car from next spring. Auris is also being sold in Japan, from today.