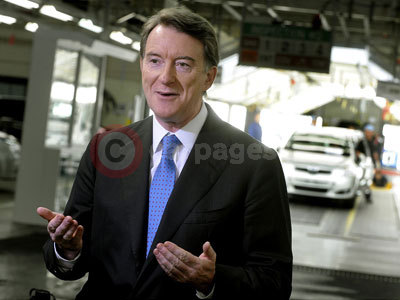 Toyota Motor Europe (TME) has announced plans to manufacture a full hybrid version of its C-segment hatchback, the Toyota Auris, at its UK-based facility in Burnaston, Derbyshire. Production of Toyota's first European-built full hybrid will kick-off at Toyota Motor Manufacturing (UK) Ltd (TMUK) in mid-2010. Engines will be produced at TMUK's facility in Deeside, North Wales. The announcement, which coincided with a site visit by UK First Secretary of State and Secretary of State for Business, Innovation & Skills Rt. Hon. Lord Mandelson, underlines Toyota's commitment to expand its offering of low-emission hybrid vehicles to customers in Europe.

"With today's announcement, Toyota has taken a significant step forward in ensuring that full hybrids become more accessible to a wider range of customers. Such efforts are crucial if we are to see more low-carbon vehicles on European roads," said Tadashi Arashima, CEO and President, TME.

"Our decision to produce a full hybrid in the UK reflects both our confidence in the quality and commitment of the TMUK workforce and the strength of our long-standing partnership with the UK Government. Today's announcement is positive for Toyota, our UK suppliers and the local communities here," he added.

Business Secretary Lord Mandelson said: "This is a welcome and forward-looking investment in Britain from a world class manufacturer. As part of our low carbon industrial strategy we set out to make Britain the best place in the world to develop low carbon vehicles. These commitments, backed by the formidable skills of the UK automotive workers enable companies like Toyota to invest with confidence in low carbon car production in the UK. It demonstrates that the UK's car industry is already making the low carbon transition."

The Toyota Auris hit the European market place in spring 2007. Since then, it has sold over 370,000 vehicles. Under the new Toyota Optimal Drive technology, the Toyota Auris now comes equipped with a 1.33-litre dual VVT-i engine and Toyota's Start&Stop technology, reducing CO2 emissions by 17% (135 g/km) and improving fuel consumption by 19% (48.7 mpg combined cycle).

TMUK started production in 1992 as Toyota's first manufacturing company in Europe and today employs around 4,100 workers. The plant has produced over 2.5 million vehicles to-date, including the Toyota Carina E, Toyota Corolla, Toyota Avensis and Toyota Auris, for sale in Europe and export overseas. TMUK represents a total investment of over £1.85 billion and is one of nine Toyota manufacturing companies in Greater Europe.