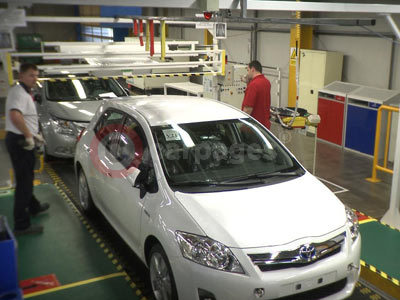 Production of the new Toyota Auris Hybrid has been supported by extensive training for all employees at Toyota Manufacturing UK's (TMUK) Burnaston and Deeside factories, both in hybrid vehicle manufacturing and wider environmental issues. The diploma they gain on completing the course has been officially recognised as a Level 2 NVQ (non-vocational qualification).

Although experienced in the production of conventional petrol and diesel models, namely the Toyota Avensis and Toyota Auris, TMUK members needed to be well versed in specific issues surrounding hybrid vehicles, such as safe handling of the high voltage elements of the Hybrid Synergy Drive powertrain. As a low emissions vehicle, with CO2 output from just 89g/km, the launch of the new Toyota Auris Hybrid production also provides an opportunity for TMUK to use the training to further extend the environmental awareness of its people, both in the workplace and in the community.

Tony Walker, TMUK Deputy Managing Director, explained: "Launching production of the new Auris Hybrid has called for a big investment in training. We have even developed a new Diploma in Hybrid Vehicle Introduction and Environmental Improvement, together with a number of partners, which has been formally recognised as an NVQ Level 2.

"It means we are the first in Europe to have the skills and knowledge needed to manufacture full hybrid vehicles. And with Toyota's strategy to progressively expand its full hybrid technology to more models, TMUK will be well placed to support this expansion."

The main objective of the Hybrid Vehicle Introduction and Environmental Improvements qualification is to improve business performance during the introduction of the new vehicle, and to implement environmental improvements both in the business and in society in general. Key to this is development of the competencies for everyone in TMUK, including management, team leaders and all other employees, who have a part to play in improving business performance.

The range of different practical study elements within the qualification includes: -

To understand and meet the special requirements of building the first European-manufactured full hybrid car, TMUK members have also travelled to Japan and the USA to learn best practice in safety and quality from their Toyota colleagues who make the Toyota Prius at Tsutsumi, the "mother" factory of Toyota's hybrid production, and in Kentucky, where the hybrid Camry is built. These teams have then been able to pass on their new skills to their colleagues through further training sessions back in Britain.

This learning is made easier thanks to the fact that Toyota production centres, wherever in the world they may be, work to exactly the same principles of the Toyota Production System, making for easier understanding and knowledge-sharing.

Daniel Nelson, TMUK's Manager New Product Quality, said: "To train our members we have looked at best practice around the world, including working with our colleagues in Japan and the USA. We have also been able to share the learning Toyota has gained through 10 years of working with Prius."

Production of the new Toyota Auris begins at TMUK's Burnaston plant in Derbyshire later this month. The 1.8-litre VVT-i petrol engine featured in the hybrid powertrain is supplied by the company's plant at Deeside in North Wales. The car goes on sale in the UK on 1st July 2010.