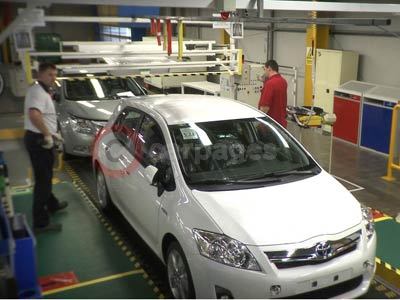 The British car industry reaches a landmark this month with the start of production of the Toyota Auris Hybrid by Toyota Manufacturing UK (TMUK), the first mass-produced hybrid vehicle to be built in Europe.

In investing in TMUK to build the new full hybrid hatchback, Toyota has signalled its confidence in its UK operations - the car plant at Burnaston in Derbyshire and the engine factory at Deeside in North Wales - and in British manufacturing. Established in 1992, TMUK was Toyota's first European production base and has benefited from £1.85 billion investment in its operations since launch.

Following a challenging time for the global motor industry, the opportunity for Toyota to take the lead with the new full hybrid Auris model is a source of great pride for the TMUK workforce, as Tony Walker, Deputy Managing Director, explained: "Auris Hybrid provides a great opportunity for Toyota to increase sales and for TMUK to increase production. Being the first to manufacture this new technology is a source of immense motivation for everyone here at TMUK."

Key challenges had to be met in preparing for production of the new model and these have been achieved in what was the shortest lead-time yet for any European-built model. Although the Toyota Auris Hybrid is a development of the conventional five-door model already produced at Burnaston, its introduction has required extensive training, new ways of working, new parts, alterations to the production lines major changes to testing procedures. Not the least of the challenges was the fact that although it is built on the same production line as petrol and diesel Toyota Auris models, the Toyota Auris hybrid takes 11 minutes longer to complete, calling for clever integration of new equipment and specialist team members to ensure no bottlenecks occur.

Maintaining Toyota's fundamental high quality was essential and this has been supported by training for the entire workforce in the special safety and technical requirements of hybrid vehicle manufacturing. The training also includes a specially developed Diploma in Hybrid vehicle Introduction and Environmental Improvement that has been officially recognised as Level 2 NVQ.

Management and representatives of the assembly and quality assurance teams have learned best practice from their colleagues around the world, travelling to the Tsutsumi "mother" factory in Japan, home of the Toyota Prius, and to Toyota's plant in Kentucky where the hybrid Camry is built. In turn they have been able to provide focused training for their colleagues in readiness for production start-up.

The exceptional environmental performance of the new Toyota Auris Hybrid, with CO2 emissions from 89g/km, aligns perfectly with TMUK's status as one of Toyota's sustainable factories, providing a lead in achieving the highest standards in environmental management.

Burnaston was the first car plant in the UK to achieve ISO 14001 certification and has reduced waste to landfill and waste for incineration to zero. TMUK continues to cut energy and water use and emissions from both its sites, with reductions of more than 70 per cent achieved between 1992 and 2008. And, as well as learning about and supporting best environmental practices in the workplace, employees are also given support to reduce their carbon footprint at home. TMUK also works with its local communities in increasing environmental awareness.

The new Toyota Auris Hybrid will go on sale in the UK and across Europe on 1st July 2010.